On April 3, 2020, the Advisory Council on Historic Preservation issued a blanket extension regarding the review under 36 CFR 800.12 of undertakings responding to COVID-19 emergency and disaster declarations. Three extensions were issued, the third of which was set to expire on December 31, 2020. Considering the likelihood of such declarations remaining in place into the foreseeable near future, and the ongoing need for federal agency responses to them, that extension is now set to expire on March 31, 2021. 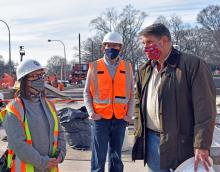 Advisory Council on Historic Preservation Chairman Aimee Jorjani today toured the site of what will be the National World War I Memorial in Washington, D.C. Located in Pershing Park one block from the White House, the memorial is expected to open to the public in April 2021. Of the four major wars of the 20th century, World War I is the last to have a national memorial in the nation’s capital.

Pershing Park, a memorial to General John J. Pershing, commander of American forces in World War I, was redesignated as the site of the National World War I Memorial through legislation signed by President Barack Obama, as part of the U.S. World War I Centennial Commission activities.

Due to the lapse in federal funding necessitating a partial government shutdown, the 45-day timeline for the ACHP to provide its final comments to the Secretary of the Navy regarding the Section 106 review for the proposed increase in the EA-18G Growler activity on Naval Air Station Whidbey Island was stopped on December 21, 2018. Consequently, the timeline began again on January 26, 2019 when the government was reopened. The new deadline for the ACHP to submit its comments is February 19, 2019.