The ACHP invites you to view videos of ACHP activities including interviews with members, tours of historic sites, award presentations, and more on the ACHP YouTube channel. 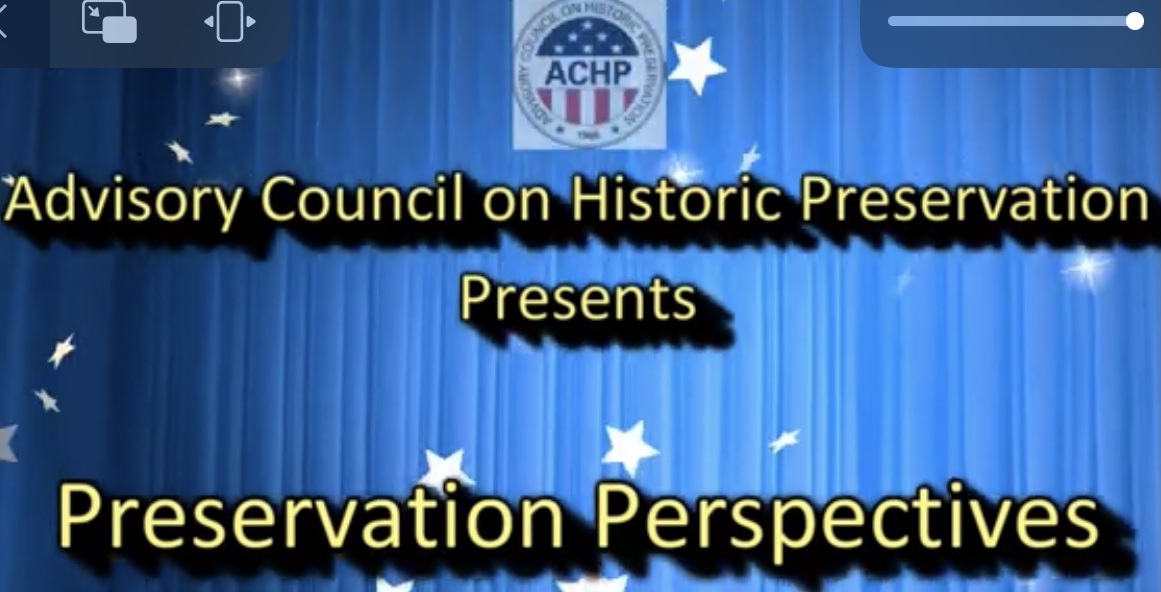 Episode 26 - December 29, 2022 - Jennifer Gibson, Director of the Center for Fine Arts at the General Services Administration -- December is National Art and Architecture Month and host Luke Nichter spoke with Jennifer Gibson about the GSA's Art in Architecture Program, which is celebrating 50 years this year. The program helps place contemporary American artwork in public spaces at federal buildings. In this episode of Preservation Perspectives, Gibson tells Dr. Nichter about the artworks that have been placed in historic federal buildings, such as the Old Post Office in Washington, DC.

Episode 25 -- December 12, 2022 - Jaime Loichinger, ACHP Office of Federal Agency Programs Assistant Director -- At the ACHP's October business meeting, members approved the Electric Vehicle Supply Equipment Exemption, which allows federal agencies installing such equipment to forgo the Section 106 review process under certain conditions. The exemption was enacted to streamline the Biden administration's efforts to electrify the federal vehicle fleet. Loichinger talks with host Luke Nichter about the exemption, what it does, and the consultation process that led to the passage of the exemption.

Episode 24 -- November 8, 2022 - Josephine Talamantez, founder and Board Chairman of Chicano Park Museum and Cultural Center -- The new Chicano Park Museum and Cultural Center opened in October 2022 in San Diego, CA. Host, ACHP Expert Member Luke Nichter spoke with Josephine Talamantez, a founder of the museum, about her efforts to preserve the Chicano Park murals and open a museum that tells the history of the area's Chicano community.

Episode 23 -- November 1, 2022 - Sheila Bird, host of THPO Talk Podcast -- The ACHP kicked off Native American Heritage Month 2022 by speaking with Sheila Bird, the host of a podcast focused on issues of interest to Tribal Historic Preservation Officers. Host, ACHP Expert Member Luke Nichter discussed with Sheila the need for the podcast and how it fits in with the ACHP's work with tribes.

Episode 20 - March 7, 2022 - Lucy Beard, Co-chair, National Collaborative for Women’s History Sites and Former Executive Director, Alice Paul Institute, Mount Laurel, NJ - Did you know there are only about 40 or so National Historic Landmarks dedicated to women in the US? Find out about that and more in this episode of the ACHP podcast, Preservation Perspectives, hosted by Luke Nichter, who spoke with Lucy Beard.

Episode 19 - February 24, 2022 - Dorothy Walker, Site Director, Freedom Rides Museum, Montgomery, AL - The ACHP commemorated Black History Month in February with a special episode of our Preservation Perspectives Podcast. ACHP Expert Member Luke Nichter spoke with Dorothy Walker, Site Director of the Freedom Rides Museum in Montgomery, AL, to learn more about the Freedom Riders and the historic building that is a museum to their legacy.

Episode 18 - February 3, 2022 - Ira Matt, New Director of the ACHP's Office of Native American Affairs - This podcast episode focused on Ira Matt, the ACHP's new director of the Office of Native American Affairs. Host Luke Nichter spoke with Mr. Matt about how he entered the historic preservation field and his goals as director.

Episode 17- November 26, 2021 - Native American Heritage Month with Shasta Gaughen - The ACHP commemorated Native American Heritage Month 2021 by talking with Shasta Gaughen, National Association of Tribal Historic Preservation Officers Chair, and Tribal Historic Preservation Officer (THPO) for the Pala Band of Mission Indians in California. Dr. Gaughen spoke with host Luke Nichter about what it is like to be a THPO, how the ACHP's training programs have been a big help to THPOs, and what the federal government can do to better work with tribes on historic preservation.

Episode 15 - October 4, 2021 - Hispanic Heritage Month - The ACHP celebrated National Hispanic Heritage Month by speaking with Desiree Aranda, Co-Chair of Latinos in Heritage Conservation. Ms. Aranda spoke about her organization and their efforts to better preserve Latino history in the U.S. They are preparing for a conference, Congreso, early next year, and are working on the Abuelas project, documenting Hispanic historic sites in Texas.

Episode 14 - May 26, 2021 - Medgar and Myrlie Evers Home National Monument - ACHP Vice Chairman Rick Gonzalez spoke with the superintendent of the new Medgar and Myrlie Evers Home National Monument in Jackson, MS, Keena Graham. She is working to open to the public the historic home where civil rights leader Medgar Evers was assassinated, to tell the Evers' story and how the home served as a planning center in the civil rights movement. The home recently became one of the newest National Park Service properties.

Episode 13 - April 30, 2021 - Arbor Day -  The ACHP celebrated Arbor Day 2021 by talking to Richard Gilbert, Nursery Manager, Charles E. Bessey Tree Nursery, in Nebraska, the state that started Arbor Day. The U.S. Forest Service operates the nursery, which was started to help with reforestation. It is the oldest nursery of its kind and has several historic buildings. It is listed on the National Register of Historic Places.

Episode 9 - January 29, 2021 - History of Black Architects - The ACHP spoke with Kwesi Daniels, Department Head and Assistant Professor, Robert R. Taylor School of Architecture and Construction Science, Tuskegee University, Tuskegee, AL. ACHP Chairman Aimee Jorjani talked to Dr. Daniels about how the architecture program developed at Tuskegee and the early African American architects who changed the course of history with their now-historic buildings. They also talk about why learning about historic preservation is important for architecture students.

Episode 8 - January 4, 2021 - Interview with ACHP Intern Glenn Vaulx - In this episode, ACHP Public Affairs Manager Lynne Richmond spoke with Glenn Vaulx, a recent graduate of Howard University in Washington, D.C. where he earned a Masters in Architecture. Mr. Vaulx served as an ACHP intern and learned about the importance of historic preservation during his time at the agency. He also talked about his thesis, which focuses on the preservation of the history of a neighborhood in his hometown of Memphis, TN.

Episode 7 - November 30, 2020 - Interview with D. Rae Gould - The ACHP spoke with D. Rae Gould, Associate Director of the Native American and Indigenous Studies Initiative at Brown University, RI, to talk about her new book Historical Archaeology and Indigenous Collaboration: Discovering Histories That Have Futures. Lynne Richmond asked her about the book and the issues of most concern to Indian tribes in the Northeast regarding historic preservation. Dr. Gould is a member of the Nipmuc Tribe, a former Tribal Historic Preservation Officer, ACHP staff member, and NAGPRA representative.

Episode 6 - November 19, 2020 - Chucalissa - It is important to preserve Native American historical, cultural, and sacred sites to tell the full story of our lands. Chucalissa, a Native North American mound complex discovered in Memphis, TN, in the 1930s tells us a lot about the people who once lived there. Lynne Richmond spoke with Cristina Rose, a graduate assistant at the C.H. Nash Museum at Chucalissa at the University of Memphis, in this episode.

Episode 4 - August 18, 2020 - 100th Anniversary of the Ratification of the 19th Amendment - The ACHP celebrated the 100th anniversary of ratification of the 19th amendment to the U.S. Constitution granting women the right to vote. ACHP Chairman Aimee Jorjani spoke with Andrea DeKoter, Superintendent of the Women's Rights National Historical Park in Seneca Falls, NY, where the suffrage movement began with a women's rights convention in 1848. Several of the original buildings involved are part of the park. Chairman Jorjani and Ms. DeKoter spoke about the importance of preservation in telling the story of the fight for women's rights that led to ratification of the amendment.

Episode 3 - August 5, 2020 - Interview with ACHP Vice Chairman Rick Gonzalez -  The ACHP spoke with new Vice Chairman Rick Gonzalez, an architect from Florida. He spoke with Lynne Richmond about his background and the interesting historic preservation projects he has worked on. He also talked about his work with ACHP Chairman Aimee Jorjani on the Traditional Trades Training Task Force, which aims to ensure a new generation of skilled preservation craftspeople.

Episode 2 - June 19, 2020 - Juneteenth -  The ACHP spoke with Robert Stanton, ACHP Expert Member and former National Park Service Director, about the holiday Juneteenth. The holiday commemorates the day when a Union general informed the enslaved people of Texas that the Civil War was over and that they were free. This episode examines what has happened since then and how historic preservation can serve to preserve the past while looking to a future that includes freedom, justice, and equality for all.

The ACHP has more than 106 Section 106 Success Stories. The ACHP has produced a number of videos to highlight these stories.

Videos and Photographs of ACHP Activities