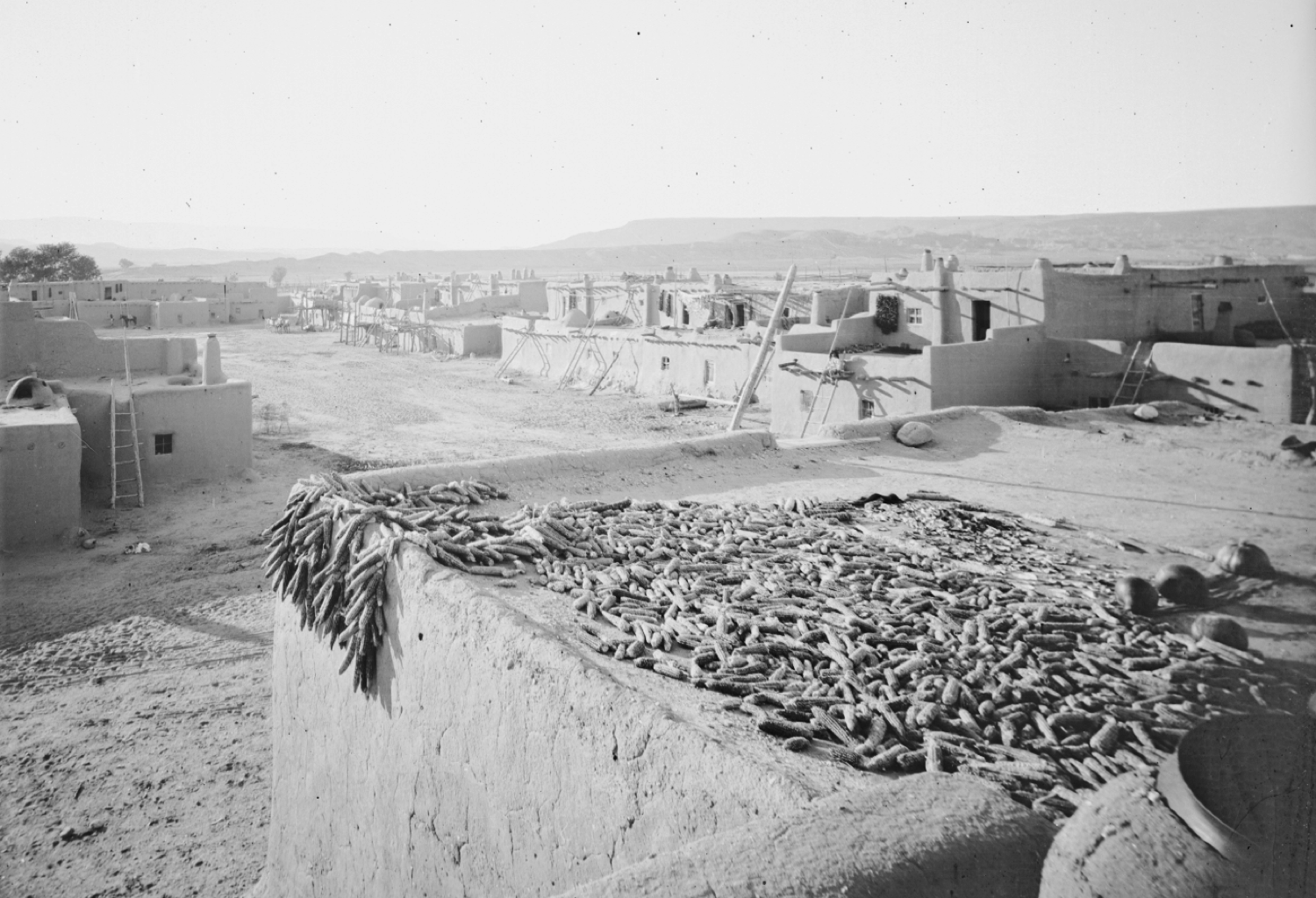 View of Ohkay Owingeh, then known as San Juan Pueblo, in 1877 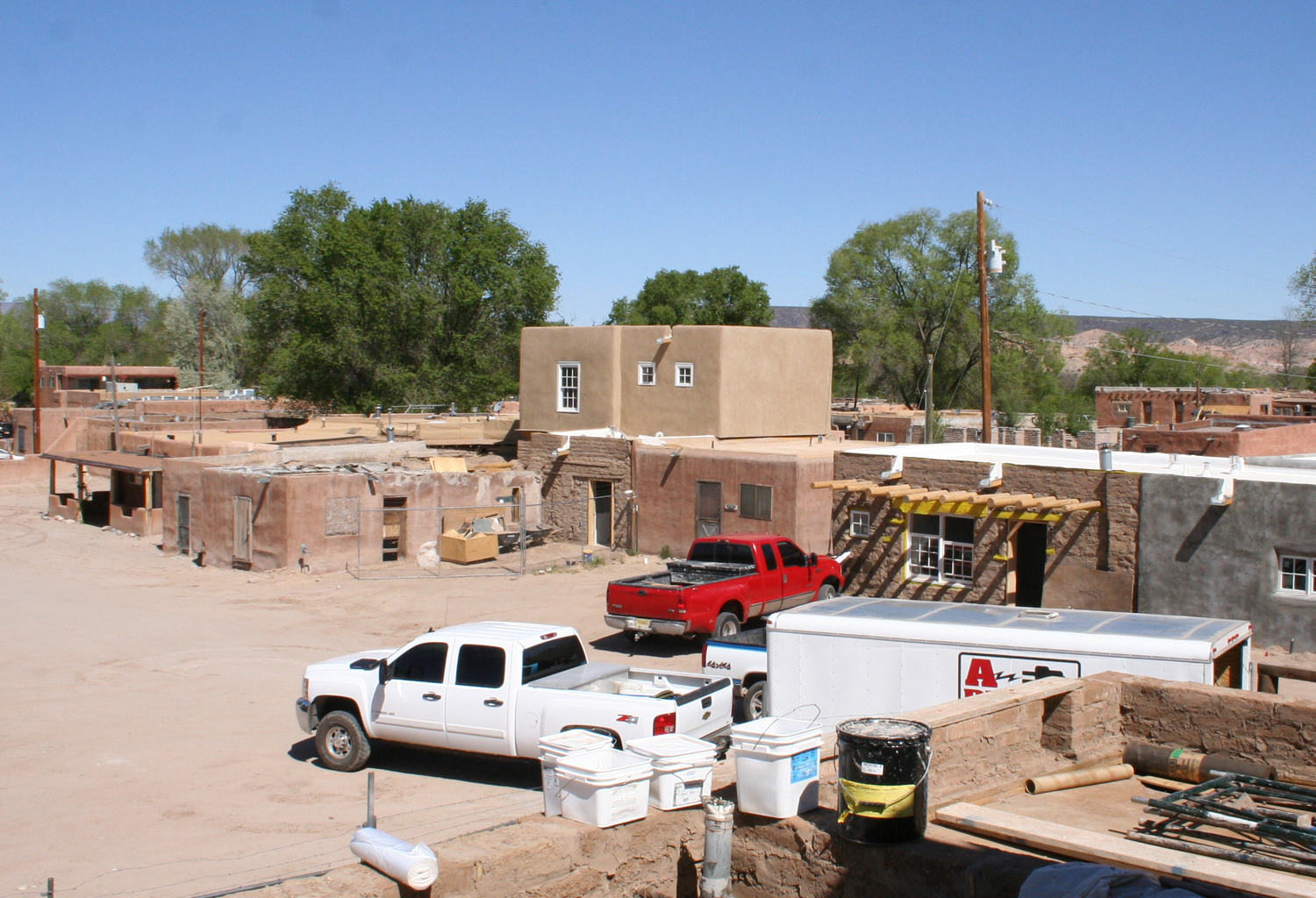 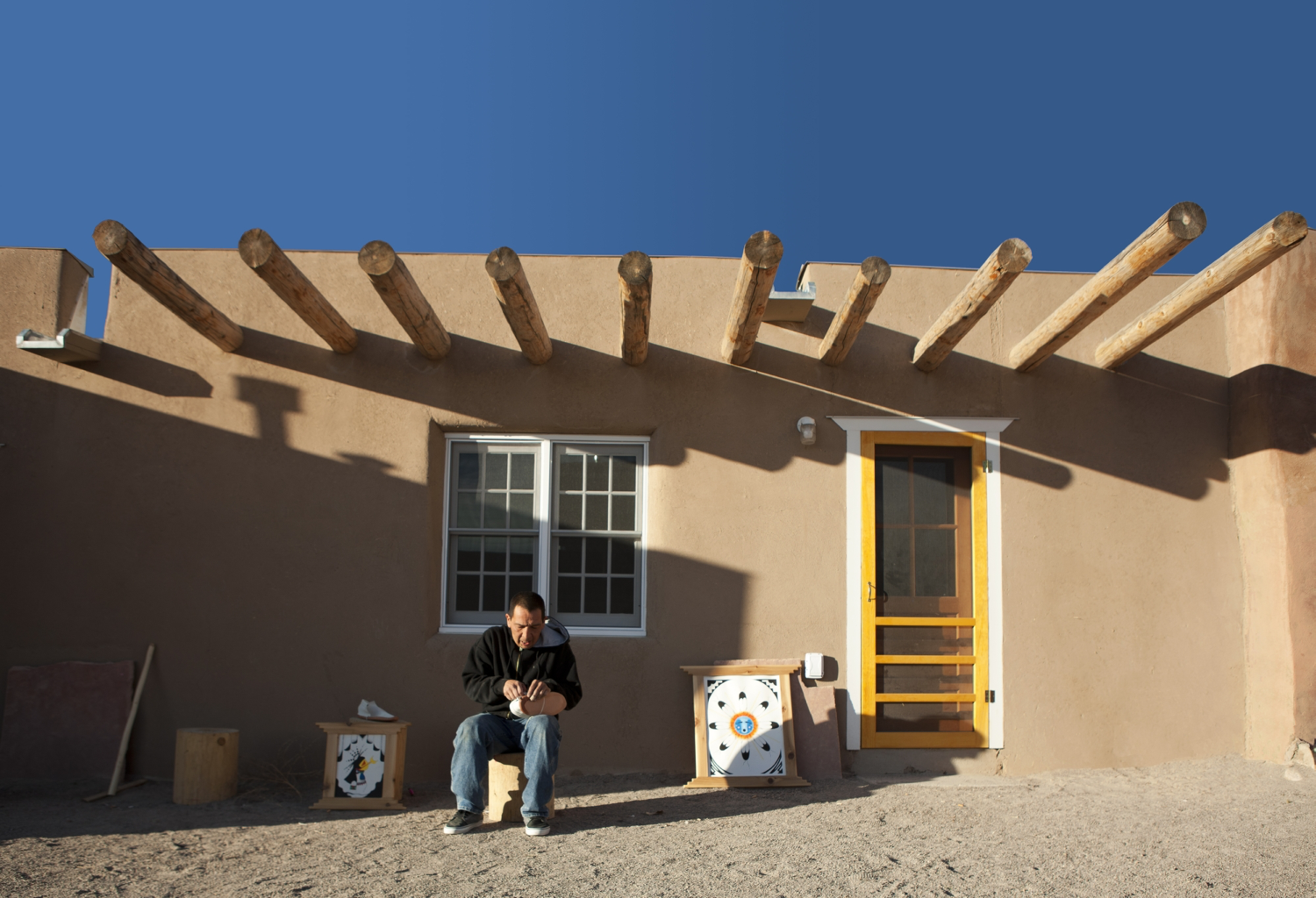 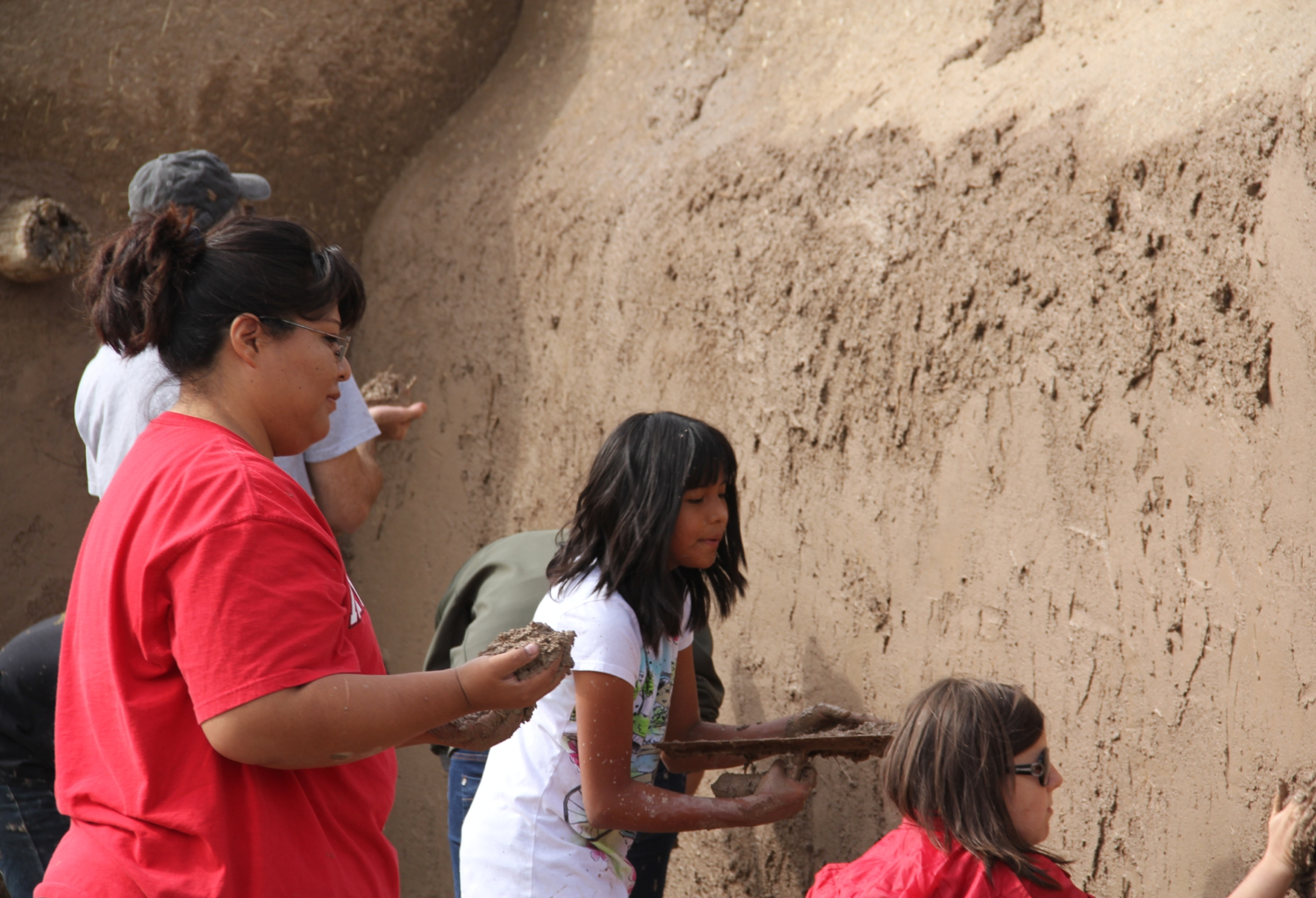 Families plastering a wall with mud

The “Place of the Strong People,” Ohkay Owingeh (formerly San Juan Pueblo) was settled more than 700 years ago and is the largest of the Tewa-speaking Pueblos in the Southwest. In 1598, Don Juan de Oñate’s colonizing expedition arrived at the traditional center of the Pueblo, Owe’neh Bupingeh, and renamed it San Juan Pueblo. Listed in the National Register of Historic Places, Owe’neh Bupingeh is comprised of four earthen plazas surrounded by interconnected handmade adobe dwellings coated in mud plaster. It is the setting for ritual observances and is the traditional spiritual center of the community.

In the 1970s, the Department of Housing and Urban Development (HUD) created subdivisions of single-family homes on the outskirts of the Pueblo, which contributed to the deterioration of life-ways, language, and centuries-old construction methods. Preserving the historic core of the Pueblo had long been a goal of Pueblo leaders. Until the 1996 Native American Housing Assistance and Self Determination Act, it was difficult for tribes to set housing policies or invest in historic housing. The Ohkay Owingeh Housing Authority (OOHA) initiated the Owe’neh Bupingeh Preservation Project to balance the preservation of the plazas with renovations and new infill housing, permitting contemporary life and cultural traditions to comfortably co-exist.

HUD, the federal agency funding this project, was responsible for conducting the Section 106 process under the National Historic Preservation Act. Section 106 requires that federal agencies assess the effects of the projects they carry out, fund, or permit on historic properties. Federal agencies also are required to consult with parties that have an interest in the fate of the property when adverse effects are likely to ensue. The project includes intergenerational documentation, a preservation plan, rehabilitation of historic dwellings, and upgraded infrastructure. Potential adverse effects were resolved through a Programmatic Agreement among HUD, New Mexico State Historic Preservation Officer (SHPO), New Mexico Mortgage Finance Authority, Ohkay Owingeh Tribal Council, and OOHA.

The project began in 2005 with a $7,500 Historic Preservation Fund grant through the SHPO to train six Ohkay Owingeh high school students in documentation. The student program continued for five summers and developed into a preservation program leveraging more than $8 million of funding. The planning was funded through preservation sources, while the implementation was funded primarily through HUD programs, creating a need to balance overlapping, conflicting standards. In addition, Rio Arriba County, New Mexico, is impoverished; thus, the rehabilitations are focused on affordable housing for families below 80 percent of area median income. The completed construction exemplifies high preservation standards, completed on an affordable-housing budget.

The Owe’neh Bupingeh Preservation Project has had a profound impact on the Ohkay Owingeh community and has been heralded as a model planning effort for Native American communities in historic settings. No pueblo tribe had previously developed a comprehensive preservation plan through HUD funds, and the program received the HUD Secretary’s Opportunity and Empowerment Award from the American Planning Association. The project required the creation of numerous committees to guide everything from practical housing concerns to aspects of private traditional knowledge. Twenty-nine families now have quality, affordable, and culturally appropriate housing. While this is important, a bigger accomplishment may be the energizing of a larger cultural rehabilitation. The contractor has committed to hiring and training tribal members. Three-quarters of her crew are Native American, and half are from Ohkay Owingeh. This has restored traditional construction practices to this community and served as a powerful economic development effort, generating more than $600,000 in salaries that stay within the Pueblo. Recognizing the opportunity to assist other pueblos, the tribe, Atkin Olshin Schade Architects, and Avanyu General Contracting have hosted dozens of tours for government agencies, foundations, other pueblos and tribes, and international dignitaries.