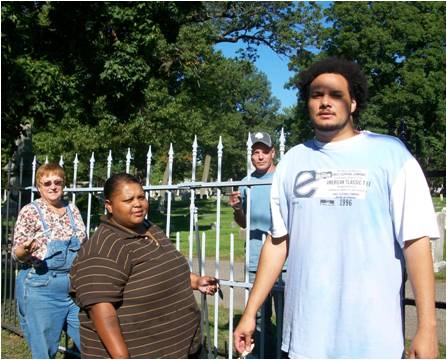 The Historic Preservation Commission of South Bend and St. Joseph County has partnered with the Schuyler Colfax chapter of the Daughters of the America Revolution (DAR) to promote the preservation and interpretation of South Bend's Historic City Cemetery. The mission of the collaboration is “to preserve, protect, share carefully and treat reverently this hallowed and historic site.” The energy and efforts of the DAR chapter combined with the guidance of the Historic Preservation Commission have resulted in significant and tangible improvements to the site while raising the issue of the value and fragility of the cemetery.

Established in 1832, the cemetery is the last resting place of numerous local luminaries, including Schuyler Colfax, 17th Vice President of the United States. Volunteer efforts have reversed years of benign neglect and deferred maintenance. Volunteers perform a multitude of tasks at the cemetery, ranging from cemetery clean up days, prepping and painting acres of wrought iron fencing, speaking at meetings to advocate for funding and the preservation of the site, and fund raising. DAR volunteers also prepared an application to have the site listed in the Indiana State Register of Historic Sites and Structures. Visitors can now appreciate and better understand the cemetery because of new signage, maps, and volunteer-led tours.

Volunteers have attended training programs on cemetery care and maintenance sponsored by the Historic Preservation Commission. The DAR has also sponsored the enrollment of a Parks Department caretaker in a cemetery preservation seminar. Recently, the local community corrections program also provided clean-up assistance through the work of individuals fulfilling community service requirements.