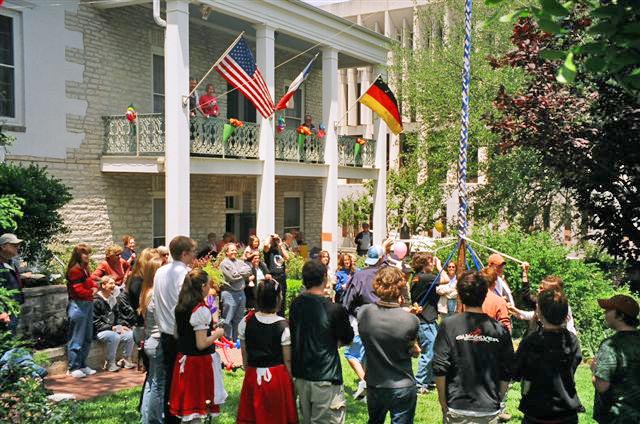 Students wrapping the traditional May Pole at the historic German Free School.
SHARE

Preservation of the German Free School

The German Free School is the headquarters of the German-Texan Heritage Society. When German immigrants settled in Austin, Texas, in the 1850s, they were dismayed to find no free public education. Seeking to remedy this situation, they began construction of the historic school building in 1857.

The outer walls were raised using the rammed earth technique, then new to Austin, wherein a wooden frame was filled with crushed limestone, water, and lime, rammed down, and let dry. The frame was then raised, and the process repeated. It is believed this is the only rammed earth structure remaining in the Austin area.

In addition to a school, the building served as headquarters for a German language newspaper and the Germania Insurance Company, and later as the home and studio of Texas artist Kelly Stevens. Stevens donated the building to the German-Texas Heritage Society in 1991, and it has served as the organization’s state headquarters since that time.

Assisting two paid staff members, volunteers maintain the property and its grounds, coordinate typical German festivals like Maifest and Oktoberfest, and give tours of the building and tell the history of the school and German settlement in central Texas. Volunteers also organize an annual meeting of society members and other interested parties, where offerings include genealogy seminars and tours of historic cemeteries.