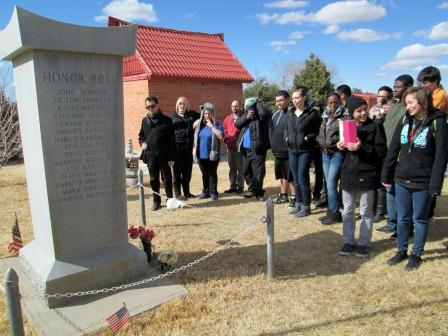 Since 1993, the Amache Preservation Society has led a grassroots effort to preserve and interpret the remains of the Granada Relocation Center, better known as Amache. The site is the most intact of the 10 World War II camps for the incarceration of Japanese Americans and is a National Historic Landmark. More than 7,000 Japanese, mostly American citizens, were imprisoned there from 1942-1945.

The Amache Preservation Society was established by a social studies teacher at Granada High School, and the organization consists of student volunteers. With the help of other organizations, the students have begun to renovate Amache, particularly its cemetery, and to establish an Amache museum. When work began, the site was being used for cattle grazing, which made restoration and interpretation of the site virtually impossible. The Society now has a 99-year lease on the property.

The student volunteers participate on archaeological excavations, undertake historic research, give tours of the site, run the museum, and maintain the cemetery. They travel throughout Colorado and into nearby states to give presentations on Amache and the World War II internment camps. A student-maintained Web site includes an audio driving tour of the site. The student volunteers also help support the annual Amache Pilgrimage, where former internees, their descendants, and other visitors come to the site to honor the memory of those who were incarcerated at Amache.