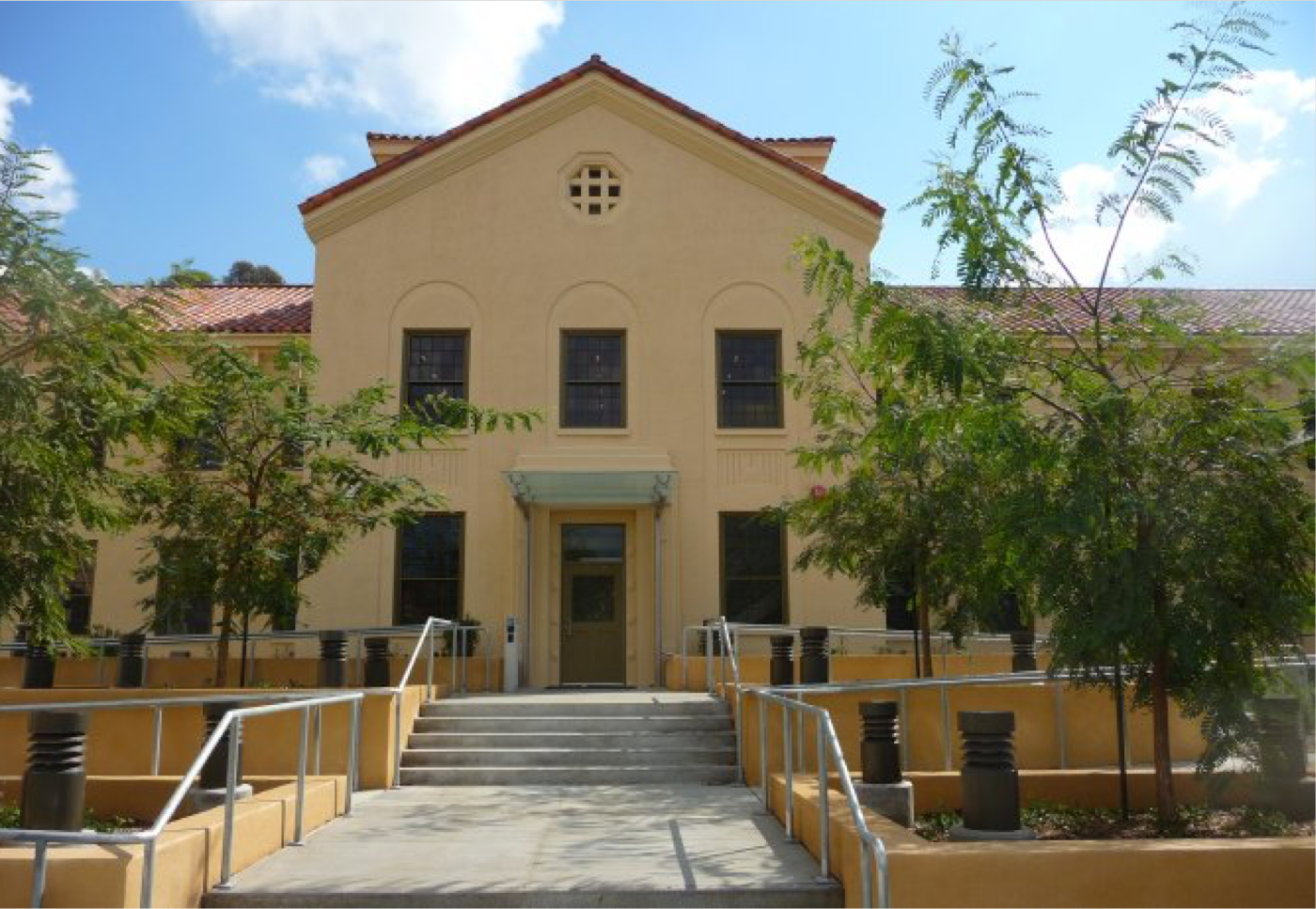 Architect Stanford White designed the Pacific Branch featuring wood buildings in the Shingle style. Some original buildings exist today, but most were replaced throughout the 1920s-1940s when the campus underwent a tremendous transformation as part of the Department of Veterans Affairs’ (VA) Second Generation building campaign. Triggered in response to the increased veteran populations, the campaign changed the Branch into a planned campus featuring Mission Revival style architecture with connecting landscapes and open spaces. Building 209, constructed in 1945, served as a part of a neuropsychiatric hospital. The Mission Revival-style building was constructed of reinforced concrete finished in smooth stucco with a terra cotta tile roof.

Building 209 would eventually be supplanted by VA’s Third Generation construction and ultimately the current main hospital constructed in the 1970s. This transition in construction is evident across the VAMC campus and reflects the changes in veteran care from the early NHDVS program to the outpatient model seen today. West Los Angeles VAMC was listed on the National Register of Historic Places in 2014, with the historic district representing an excellent, intact example of a Second Generation veterans hospital built upon the campus of the first NHDVS branch on the west coast.

In 2011, the VAMC proposed to rehabilitate Building 209, at the time vacant, to provide long-term supportive residential housing for homeless veterans. The project would include seismic upgrades and a major renovation of the existing building including the reconfiguration of the interior into residential living units with support spaces, new mechanical, electrical, and life safety systems, and landscaping. The project also sought to achieve LEED gold certification in support of VA’s larger sustainability initiatives.

VA, the federal agency carrying out these projects, was responsible for conducting the Section 106 review process under the National Historic Preservation Act, which requires agencies to identify historic properties and assess the effects of the projects they carry out, fund, or permit on those properties. Federal agencies also are required to consult with parties that have an interest in the fate of historic properties when adverse effects are likely to ensue.

Recognizing that Building 209 was a contributing resource, the VAMC engaged an architecture firm and qualified preservation contractor to assist in the Section 106 consultation and design of the proposed project. Drawing on the contractors’ expertise, the VAMC consulted with the California State Historic Preservation Officer (SHPO) on the effects of the proposed project on the historic property. While the rehabilitation would retain most of the building’s contributing features by adhering to the Secretary of the Interior’s Standards (Standards), the original metal windows would be replaced, causing an adverse effect on the property.

The SHPO encouraged the VAMC to consider alternatives to replacing the windows in order to preserve the historic fabric. Parties agreed this would be ideal, but that approach would not meet VA’s energy reduction requirements. However, through additional Section 106 consultation including the VAMC’s consultants, an alternative was discovered consistent with the Standards. The approach would preserve the steel frames and sashes while replacing the existing glass with a new laminated glass, thereby addressing the energy performance requirements. With this solution, the VAMC was able to preserve the building and its historic elements, avoiding adverse effects altogether.

Opened in 2015, Building 209 provides housing and healing space for homeless veterans. The awardwinning rehabilitation project demonstrates the benefits of a federal agency engaging qualified expertise to assist in both design and consultation. The result was an exemplary preservation project that supports VA’s mission of caring for the nation’s veterans. Now equipped with a proven example of sustainable reuse of historic properties, the VAMC hopes to implement future renovations utilizing similar structures on the West Los Angeles and other VAMC campuses.