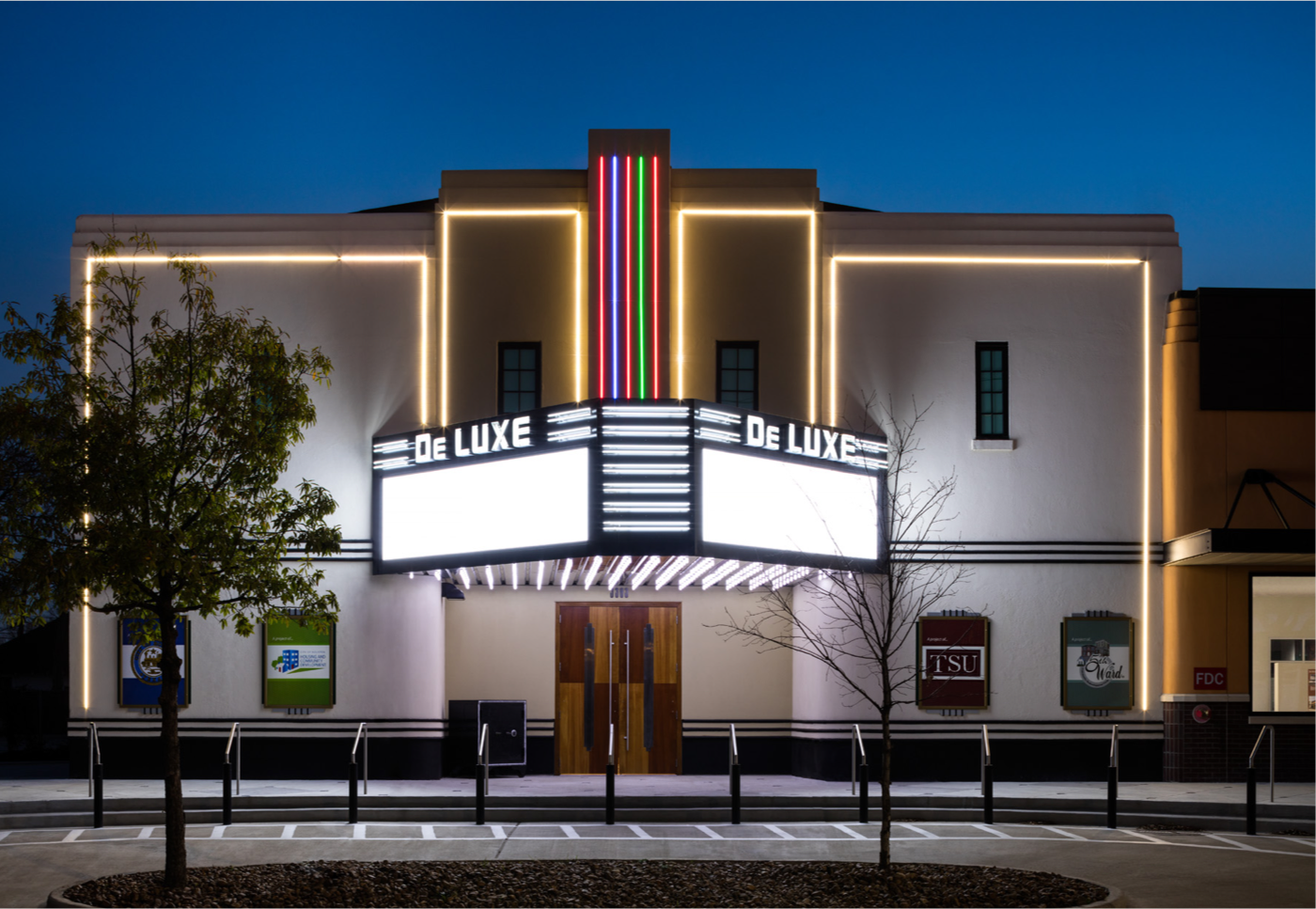 Originally settled in the 1800s, Houston’s Fifth Ward has a history rich in African American leaders and artists including the late Congressman Mickey Leland, Congresswoman Barbara Jordan, civil rights pioneer Dr. Lonnie Smith, boxer George Foreman, and jazz artists Joe Sample and the Crusaders. In 1941, the DeLuxe Theater opened in the Fifth Ward as the first African American movie house in Houston. The Streamline Moderne theater operated for 28 years as one of the few venues open to black residents during segregation until closing in 1969. It re-opened in 1971 to house the DeLuxe Show, one of the first interracial exhibitions of contemporary artists under sponsorship of the Menil Foundation and continued to host exhibits through 1973. Despite hopes of continuing to use the theater as an arts venue, the structure sat vacant and abandoned for 40 years until the City of Houston acquired it in 2009. The DeLuxe Theater was determined eligible for the National Register of Historic Places in 2008.

In 2008, the City of Houston and Fifth Ward residents decided to build a culture and arts center on the DeLuxe Theater site to spark development and serve the Fifth Ward community and surrounding neighborhoods. The City planned to purchase the DeLuxe Theater using Community Development Block Grant (CDBG) funds from the Department of Housing and Urban Development (HUD) and considered demolition or rehabilitation.

Section 106 of the National Historic Preservation Act requires federal agencies to take into account the effects of projects they carry out, fund, or permit on historic properties prior to making final decisions on projects. The law creating the CDBG Program delegates that responsibility to HUD’s grantees, so the City of Houston undertook compliance with Section 106.

Through evaluation and consultation with the Texas State Historic Preservation Officer (SHPO), the City decided to rehabilitate the DeLuxe Theater and an adjoining storefront. After years of neglect, all that was left of the theater was a shell, but the vision was to maintain the characteristics of the theater including the concrete surfaces, rounded corners, semicircular bays, metal windows, and other Art Deco design details. Completed in 2015, the re-created 8,000 square foot theater is back to its original 1940s Art Deco exterior, with a new marquee, rebuilt structure, and renovations. The theater’s interior seating was re-designed to accommodate an audience of 125 people for small performances and productions. In addition, what was once a furniture store next to the DeLuxe Theater was designed as a multi-purpose area with maximum flexibility so it can be used as performance or classroom space. The $5.7 million project was a collaborative effort between the City of Houston, Texas Southern University, and the Fifth Ward Community Redevelopment Corporation. It features a high profile art gallery space with an emphasis on artists who live in the Fifth Ward and a fully functional branch of the Houston Public Library.

Today, residents and visitors to Houston’s Fifth Ward and surrounding neighborhoods can re-connect with the community’s proud history and culture through a wide range of arts, civic, and private events, and celebrations at the site. The renovation of the historic theater has brought back to life an architectural gem and made it the pride of the community once again. It is operated through a tri-party agreement between the City of Houston, the Fifth Ward Community Redevelopment Corporation, and Texas Southern University with programming offered by both the Fifth Ward Community Redevelopment Corporation and Texas Southern University. Envisioned to be a place for young people and a place for learning, the preserved DeLuxe Theater is the cornerstone to the future revitalization of the Fifth Ward.