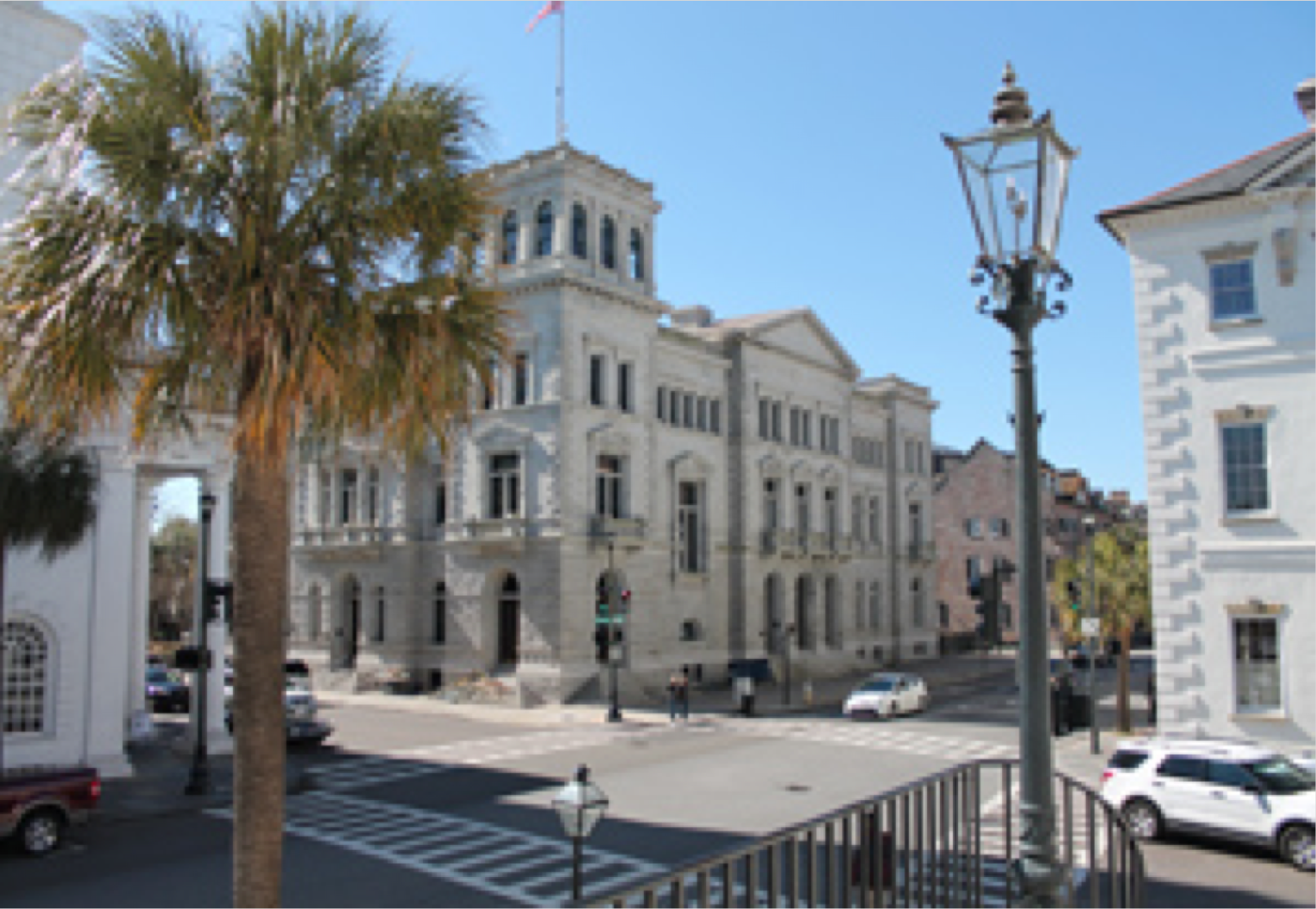 Charleston, South Carolina, founded in 1670, was the cultural center of the antebellum South and is known for its rich collection of historic architecture spanning three centuries. The city adopted the country’s first historic preservation ordinance in 1931, and most of the city center has been designated a National Historic Landmark (NHL) District. A focal point of the district is the intersection of Meeting and Broad streets, commonly referred to as the “Four Corners of Law,” where each corner is anchored by a historic building representing an aspect of the law. They include St. Michael’s Episcopal Church (1751-1761), also an NHL, which symbolizes ecclesiastical law; the Charleston County Courthouse (1790-1792); Charleston City Hall (1800-1804); and the U.S. Post Office and Courthouse (1896). Individually listed on the National Register of Historic Places, the U.S. Post Office and Courthouse is an excellent example of Second Renaissance Revival architecture.

In 1980, the General Services Administration (GSA) announced plans to build an annex to the U.S. Post Office and Courthouse for the U.S. District Court for the District of South Carolina. The proposed site was an adjacent park. Due to growth in the court’s program needs, the original plan for a 12,000-square-foot addition soon almost tripled in size, sparking significant local controversy. The large scale of the project and its modern design led to objections regarding visual effects to the courthouse and the surrounding NHL district, particularly the Four Corners of Law. Project opponents also raised concerns regarding the potential seismic impacts of construction to the foundations of nearby historic buildings, notably St. Michael’s Church, and loss of part of the park.

GSA, the federal agency carrying out the project, was responsible for conducting the Section 106 process under the National Historic Preservation Act. Section 106 requires that federal agencies identify historic properties and assess the effects on those properties of the projects they carry out, fund, or permit. Federal agencies also are required to consult with parties that have an interest in the fate of historic properties when adverse effects are likely to ensue.

Consultation among GSA, the courts, the Advisory Council on Historic Preservation (ACHP), the South Carolina State Historic Preservation Officer, the City of Charleston, and the Historic Charleston Foundation led to some changes in the project’s design, but when the parties could not reach agreement, consultation was terminated. In accordance with the Section 106 regulations, the ACHP membership convened in Charleston in December 1983 to review the case and hear public testimony. In its resulting comments to the GSA Administrator, the ACHP recommended that GSA re-examine its proposal, consider building on another nearby site, and undertake engineering studies to avoid damage to St. Michael’s Church. In response, GSA informed the ACHP that it intended to proceed with the project on the original site but would modify its plans to be responsive to the ACHP’s comments in certain respects, such as addressing seismic impacts to St. Michael’s. Local opposition continued, however, leading to introduction of legislation in Congress to eliminate authorization of the project.

Recognizing the federal responsibility to minimize harm to NHLs, GSA ultimately decided to take another look at the proposal as recommended by the ACHP and consulted further with local preservationists, city and state officials, and judges from the U.S. District Court. This led to development of a new design that situated the annex differently on land purchased by the city, preserved the park, and screened the annex from the Four Corners of Law intersection. Based on this compromise, construction began in 1986, and the courthouse annex opened in 1988.

The Courthouse Annex is widely viewed to be harmonious with the NHL historic district and the Four Corners of Law. Building upon this successful solution, when more courthouse space was needed in later years, GSA elected to renovate properties on Broad Street to obtain the additional space. The Section 106 process was the primary forum for public involvement and proved essential to informed federal decision making. The process elevated the community’s concerns to the level of GSA’s leadership and positively influenced the project. In the end, GSA’s new design fully addressed the concerns raised in the ACHP comments. The Section 106 process helped maintain the integrity of the Charleston NHL District and the historic U.S. Post Office and Courthouse while meeting the needs of the federal judiciary.