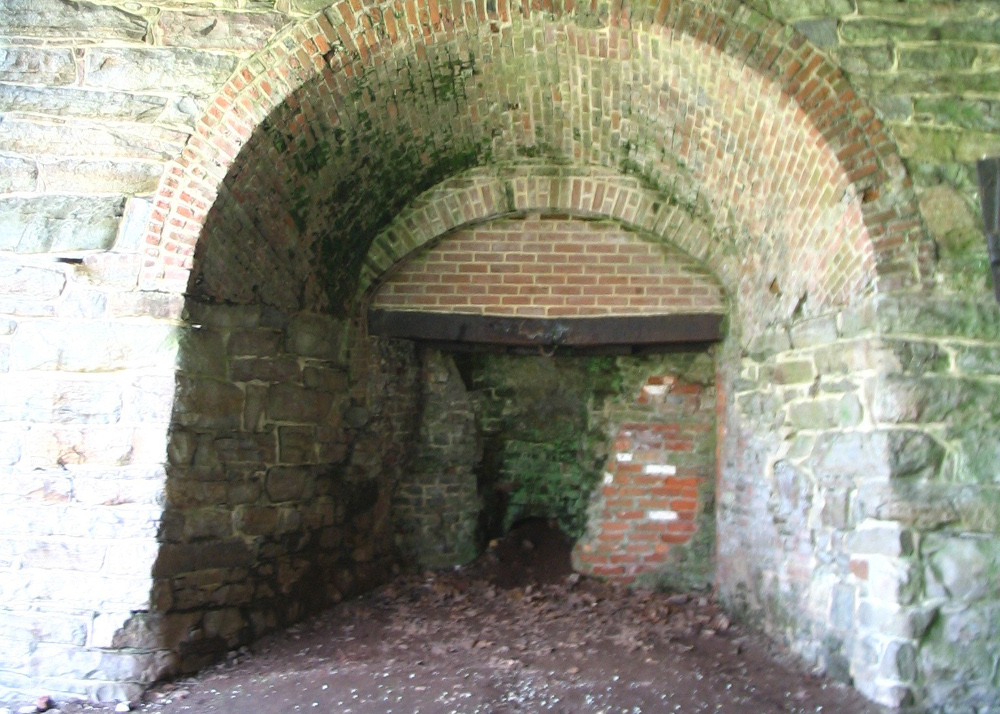 A view of the historic Catoctin furnace 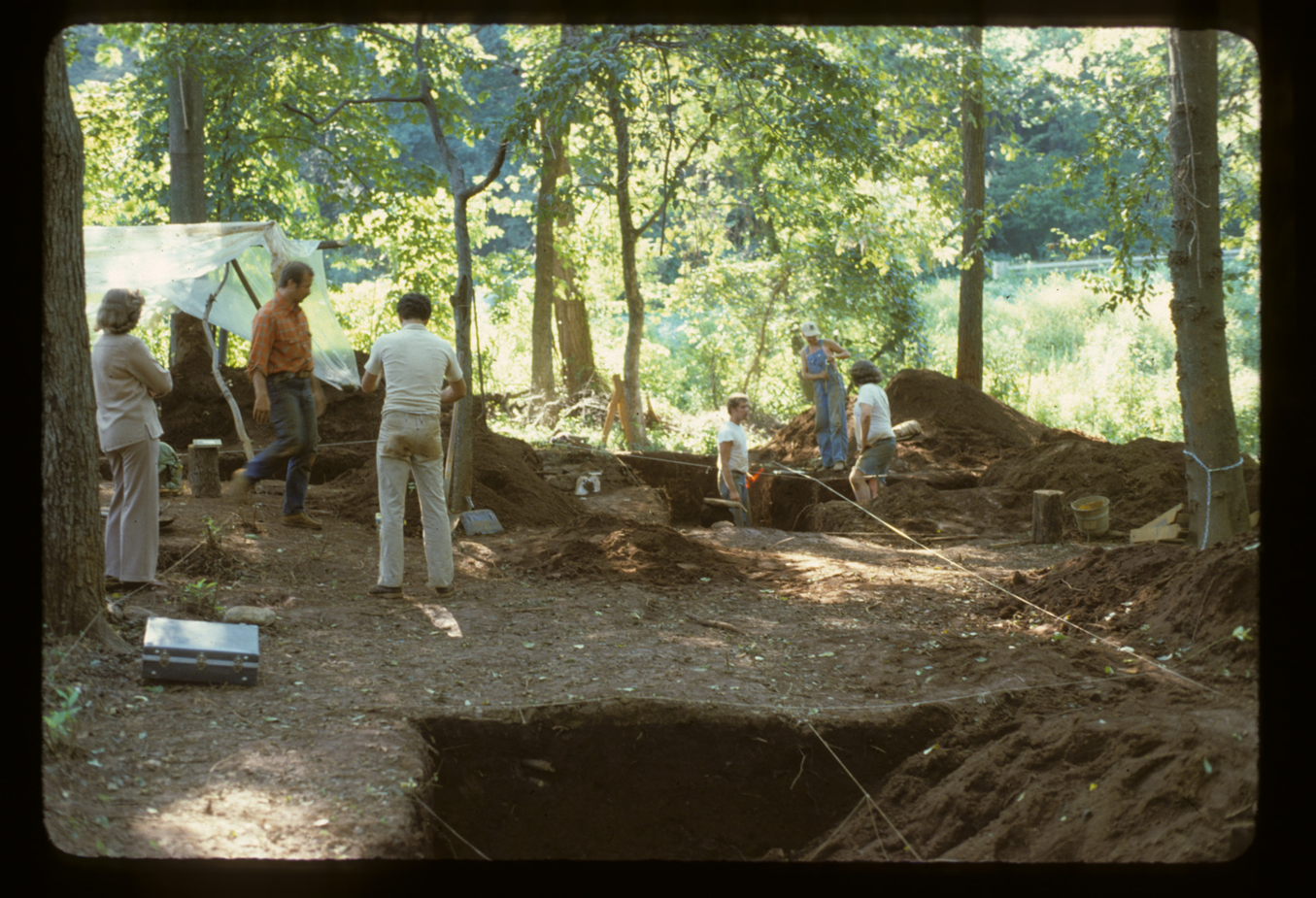 The 1979 excavation of the furnace 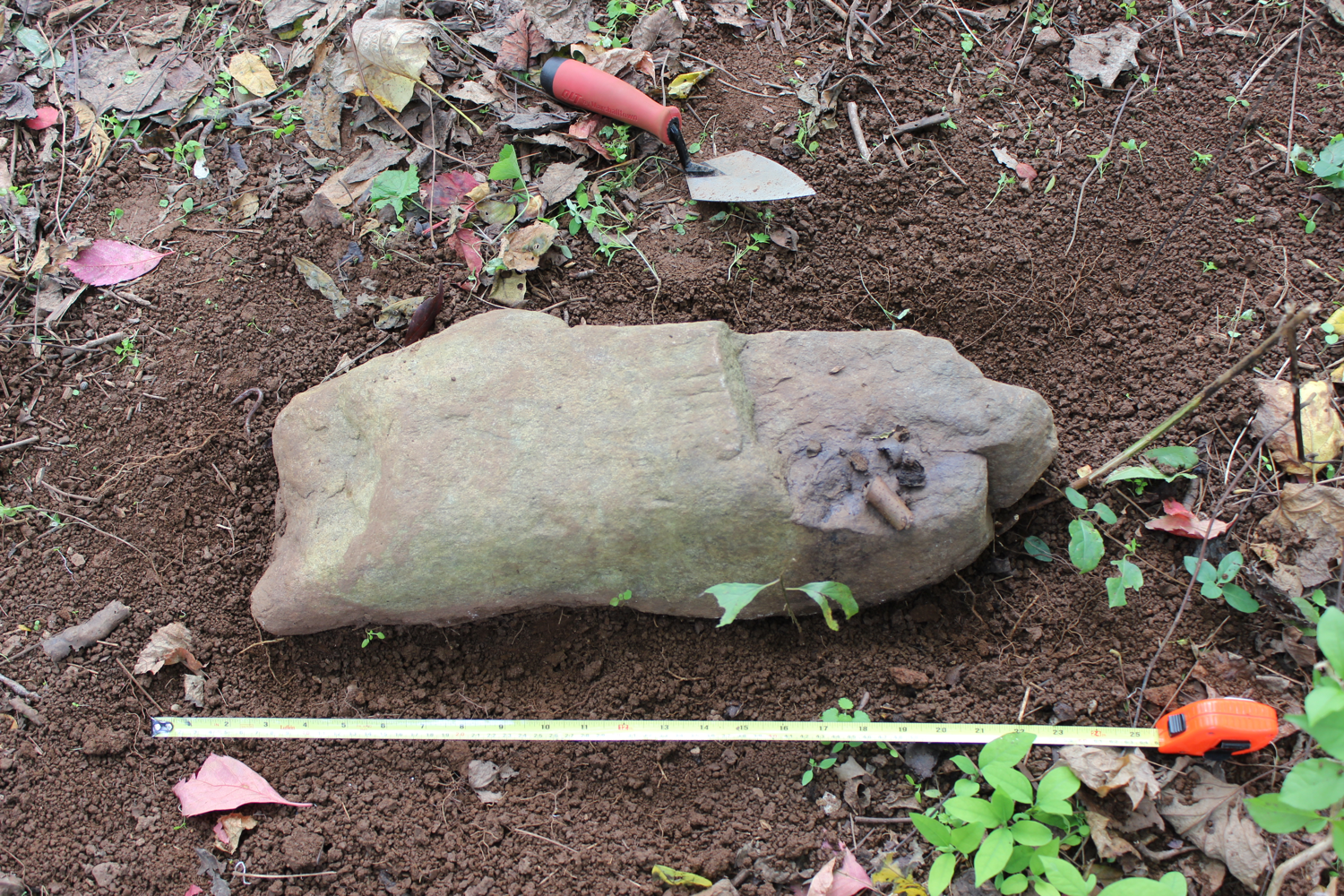 A grave marker at the site 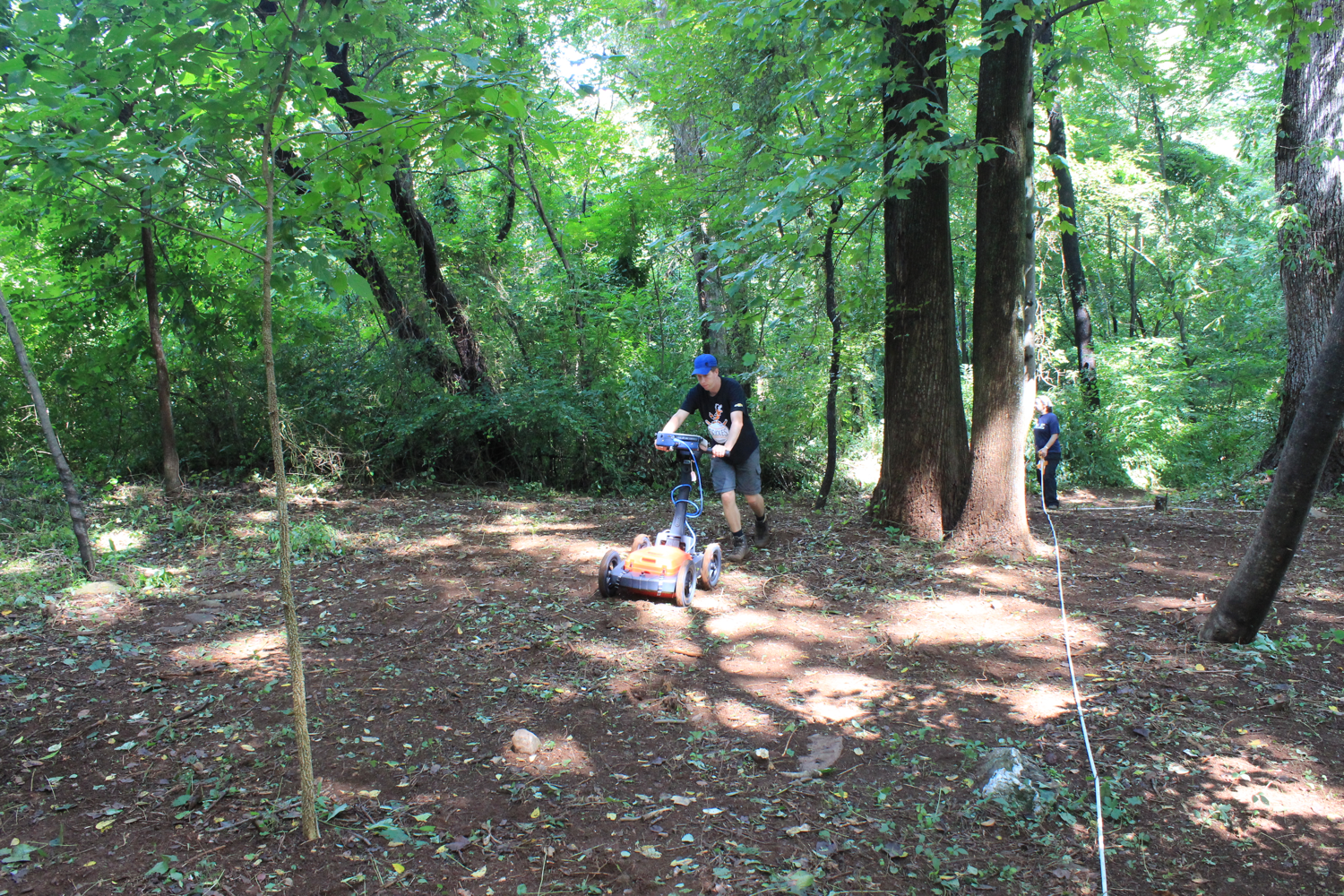 A radar survey in action, used to locate unmarked graves 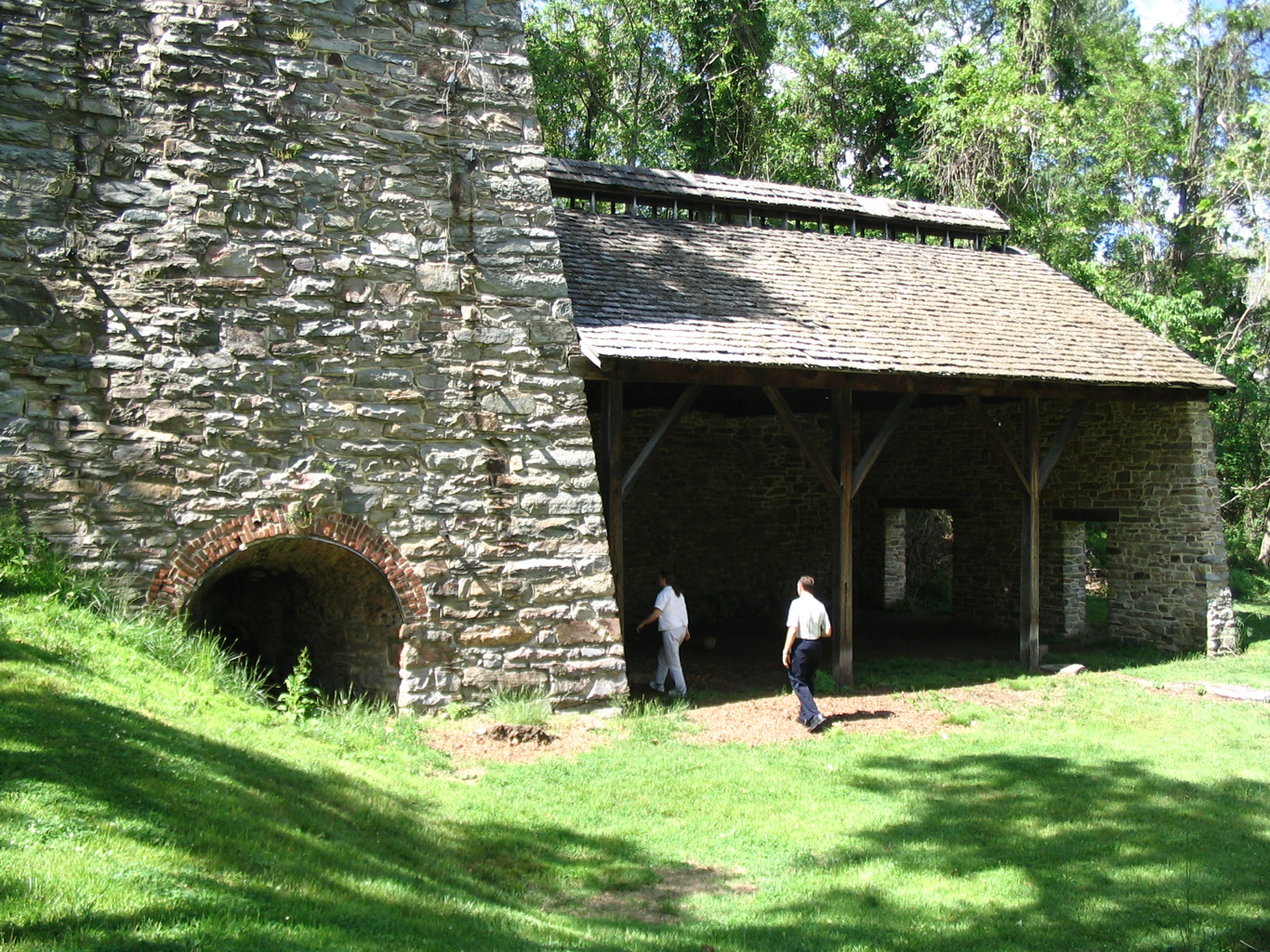 Visitors at the remains of the furnace

In the 1770s, hematite ore was discovered in the Catoctin Mountains of Maryland by Thomas Johnson, Jr., who later became the first governor of Maryland and delegate to the Continental Congress. Johnson and his brothers excavated the ore beds, and the adjacent village of Catoctin Furnace was built around the associated furnace. The furnace first employed a labor force of enslaved African Americans then European immigrants. The laborers mined the ore, provided timber and charcoal from the Catoctin Mountains, and produced pig iron. The pig iron was made into a variety of tools, armaments, (including cannonballs used during the siege of Yorktown) and the “Catoctin Stove,” more popularly known as the “Franklin Stove.”

The furnace continued to operate until the beginning of the 20th century and remained in private ownership until 1936, when the National Park Service (NPS) acquired it as part of Catoctin Mountain Park. The NPS stabilized the ruin and eventually transferred the furnace ruins and surrounding land to the State of Maryland in 1954 as part of Cunningham State Park. The village and ruins were listed as a district in the National Register of Historic Places in 1971.

In the 1970s, the Maryland State Highway Administration (SHA) initiated plans to make Route 15 into a divided highway using federal highway funds. The proposed alignment would abut the Catoctin Furnace ruins, which raised concerns that construction of the road and subsequent vibration from traffic would heavily impact the ruins and ore beds.

The Federal Highway Administration (FHWA) was responsible for conducting the Section 106 process under the National Historic Preservation Act. Section 106 requires that federal agencies identify historic properties and assess the effects of the projects they carry out, fund, or permit on those properties. Federal agencies also are required to consult with parties that have an interest in the fate of the property when adverse effects may ensue.

Village residents viewed the project as a threat to local history and formed the Catoctin Furnace Historical Society to preserve the history of this early industrial environment. With assistance from NPS, the society joined the newly-instituted Section 106 process as a consulting party and raised questions about adding a second lane in the vicinity of the village, ruins, and ore beds. The SHA agreed to conduct preliminary historical and archaeological surveys to evaluate the nature and presence of historic resources as a means of assessing and resolving the impacts of the project. Archaeological surveys and data recovery led to the discovery and eventual removal of 35 individual burials along the proposed eastern alignment, which proved to be part of a previously undocumented African American cemetery. If implemented, the proposed alignment would have directly impacted approximately one-third of the cemetery.

Through the Section 106 process, the community was successful in working with the SHA and FHWA to redesign US Route 15, leading to a chain of events and discoveries that eventually contributed to the development of Catoctin Furnace as a historical landmark open to the public. Data from archaeological investigations was key to interpreting the virtually unknown history of the enslaved African American workers at Catoctin Furnace. The Catoctin Furnace Historical Society and local residents continue to take full advantage of the information to interpret the history presented to visitors.

With DNA testing assistance from the Smithsonian Institution, the Catoctin Furnace Historical Society is working to understand the population of the African American Slave Cemetery, reconstruct their history, and recognize their contributions to the success of the ironworking community. An important goal is to reach out to the living African American community in Maryland and beyond in order to connect and involve them in the interpretation and presentation of the history at Catoctin Furnace, the surrounding region, and other early industrial complexes in America. Through the initial success of the Section 106 process in discovering and saving the cemetery, this untold story can now be told.