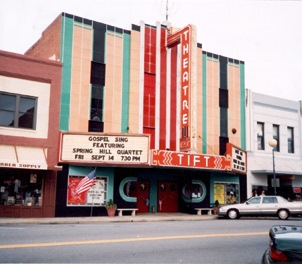 Tifton, Georgia, (population 16,327) located in the southern part of the state, was founded in 1872 by lumberman Henry Harding Tift. The city was incorporated in 1890 and grew quickly as a result of its central location and proximity to several main transportation routes.

Historically a producer of timber, tobacco, peaches, and cotton, Tifton’s economy continues to be based in agriculture. Known as the “Plant Center of the World,” the Tifton-Tift County area produces 50 of Georgia’s agricultural products. Distribution and tourism are also major industries, as the city remains a major crossroads for South Georgia.

Tifton’s Museum of Arts & Heritage is housed in a 1901 church that was the city’s first brick building. The restored Tift Theatre, an art deco style movie theater, presents concerts, plays, and dance performances. The community has also restored a complex of historic structures along Main Street, including an early example of gasoline station architecture and an early 20th century commercial building.

The downtown’s cornerstone building, the 1906 Myon Hotel, had fallen into considerable disrepair. In 1986, the city completed an extensive restoration of the building. The original lobby area and part of the structure are being used as the city hall and the remainder of the former hotel has been developed into a multi-use complex of professional office space, retail, and upscale residential space. This project served as a catalyst for the downtown revitalization program (Main Street), and created a ripple effect in the surrounding area. Buildings were bought and restored at a phenomenal rate. The city’s commitment to the preservation of such a significant structure led to new businesses being established Downtown and new jobs being created