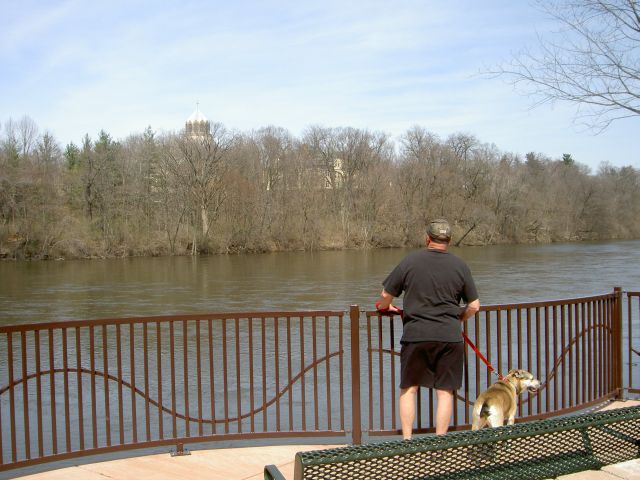 Potawatomi Indians of the Pokagon Band were the first known peoples to inhabit what became South Bend, Indiana, (population 108,000). European settlement began in earnest with the arrival of Alexis Coquillard in 1823. The city was known briefly as Southhold, but the name South Bend was adopted later due to the city’s location on the “south bend” of the St. Joseph River. South Bend was incorporated as a city in 1865.

Canals, or “races,” built along the St. Joseph River facilitated the transportation of goods to and from the area, and five railroad lines crossing South Bend later provided this service. Many companies manufactured goods in South Bend, including Studebaker, the Singer Sewing Machine Company, and Oliver Chilled Plow. The decline of heavy industry in the 20th century hit South Bend hard, but the city is working to bring other industries, including small-scale manufacturing, medical services, professional services, and educators to the area. The area is also home to five colleges and universities, including the University of Notre Dame, the largest employer in St. Joseph County.

In 2007, a collaborative, yearlong “City Celebration” promoted and displayed the city’s cultural resources with monthly programs. The project was a joint venture among the Historic Preservation Commission, the city of South Bend, the Office of the Mayor, and many other local organizations and agencies. The events included an outdoor movie screening, a city cemetery tour at dusk, extended hours at museums, an event called “March Museum Madness,” and a lecture from a noted landscape architect on George Kessler, the designer of South Bend’s parks and boulevards system. The events were well attended and served as a great introduction or re-introduction to many of the city’s attractions. The project also created new partnerships and a general spirit of cooperation between groups.

Navarre Cabin, built in the 1820s and located in Leeper Park, hosts an event for school children called “Cabin Days.” Students visiting the cabin on field trips learn about pioneer life. They see candles dipped, firewood split, and meals prepared on an open fire. They can also play period games and explore the recently restored cabin. The children are invited to come back with their parents during the summers for “Family Days at the Cabin” to share what they learned during the school year.

A walking tour of South Bend’s West Washington Street National Historic District has been created, funded in part by a grant from the Historic Landmarks Foundation of Indiana. Brochures and a downloadable podcast are available for exploring the neighborhood, and guided tours are planned.

The Historic Preservation Commission of South Bend and St. Joseph County was established in 1973, and South Bend is a Certified Local Government. The commission hosts “Workshop Wednesdays” covering such topics as “Creating an at-Home Archive,” “Researching Your House History,” and “Winterizing Your Old House.” The commission also sponsors the Southhold Awards, which recognize exemplary efforts in restoration, adaptive re-use, and preservation. The Glorious George award was recently developed in honor of George Kessler. It acknowledges outstanding landscape design within each of the nine local historic districts.