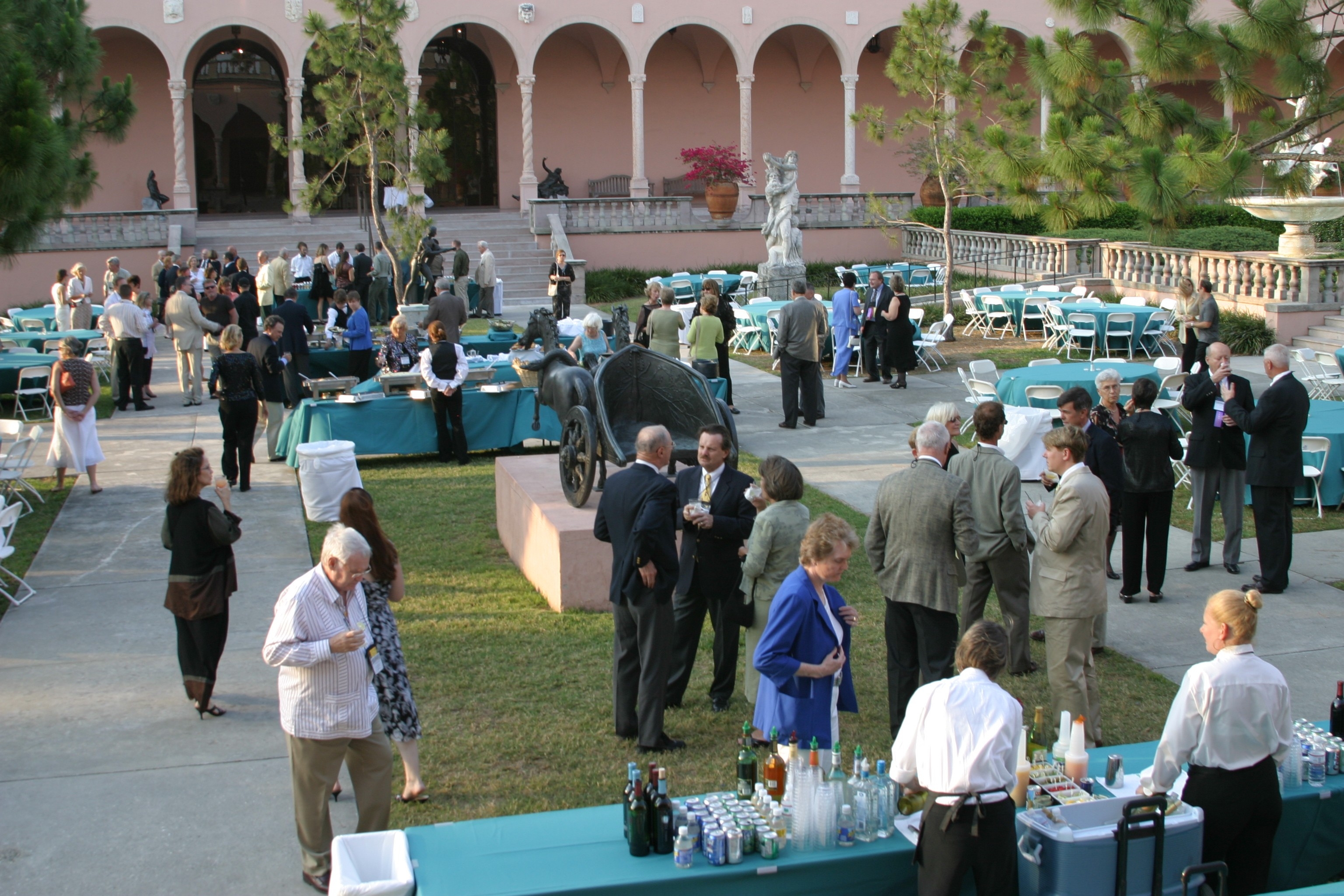 John Ringling, of circus fame, built a mansion called Cà d’Zan in Sarasota, Florida, and filled it with European art treasures. Here participants enjoy a reception outside the Ringling Museum of Art.
SHARE

Native Americans lived in what is now Sarasota, Florida, (population 55,644) for thousands of years before gold-seeking Spanish explorers first visited the area in the 1500s. The city’s location on the western coast of Florida, along the Gulf of Mexico, was an ideal spot for fishing, and by the mid-1700s colonial American and Cuban fishermen had seasonal fishing camps in the area.

European settlers first arrived in significant numbers in the late 1840s. In 1885 the Florida Mortgage and Investment Co., based in Edinburgh, Scotland, sold Scottish settlers plots of land in a place described as a tropical paradise called Sarasota. Once the settlers arrived, they found that the recently platted town lacked streets, roads, and stores. Most left, but some stayed on, and development began. The city of Sarasota was incorporated in 1913.

The early 20th century brought wealth and the circus to Sarasota. In 1914, Bertha Palmer, a wealthy widow from Chicago, began spending winters in Sarasota. Greatly enjoying the city, which she compared to Naples, Italy, she went on to build a resort and eventually became the largest landholder in the city, using her vast tracts of land primarily for agriculture. Sarasota became a very fashionable place for the wealthy to winter, and brought businessmen such as John Ringling, who came to Sarasota in 1919. Ringling built a mansion called Cà d’Zan (House of John) and filled it with a large European art collection. In 1927 Ringling made Sarasota his circus’ winter headquarters. Other circuses followed, and Sarasota became known as the Circus City.

A real estate crash in the late 1920s brought a period of decline to Sarasota, but after World War II the city began to boom again. Tourism once again is the largest sector in the local economy, as visitors flock to relax at the beaches, play golf, and visit the city’s numerous cultural and historic sites.

Recently, the city of Sarasota and the Historical Society of Sarasota County worked together to save a historic property, the Luke Wood House. The building is believed to be the oldest standing residential structure in Sarasota and dates to 1882. The house had been moved from its original site once before and was located next to the historic Crocker Church, built in 1901. In 2005 both buildings on the site were threatened by new development. The historical society made a deal with the developer for both properties, and with help from the city, moved the buildings into Pioneer Park. Plans are underway to renovate the buildings into offices for the historical society, a community museum, and community meeting space. The move has sparked other renovation projects in the area, and the neighborhood was recently designated a National Historic District.