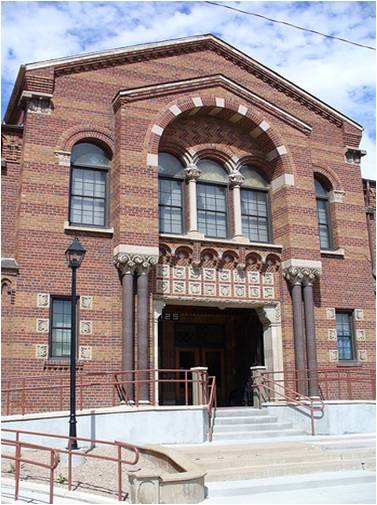 Pueblo, Colorado (population 102,121) was once four separate towns: Pueblo, South Pueblo, Central Pueblo and Bessemer. Founded in 1842 on the Arkansas River, which divided the United States from Mexico, El Pueblo was an important cultural crossroads of the Southwest.

Several groups traded, farmed, and ranched in and around this combination trading post and settlement: Anglo, French, and African-American trappers and traders; Mexican settlers and their families; and Plains, Iroquois, Delaware, and Cherokee Indians.

Tensions mounted between the tribes and the trappers, traders, and settlers, and following a raid on the Utes and Jicarilla Apaches land, the tribes attacked the post on Christmas 1854, killing or capturing those present. The post was abandoned and later disappeared under the changing landscape of a growing city.

In 1959, the Colorado Historical Society converted the old Pueblo Municipal Airport hangar into the original El Pueblo Museum to interpret the rich and diverse heritage that has made the region a crossroads of culture for more than three centuries. An archeological excavation to locate the remains of the original El Pueblo trading post began in 1988, and uncovered partial remains in the middle of the downtown district. The excavation site, enclosed by a glass pavilion, is now part of a new museum complex.

A restored historic railroad freight house serves as the Southeastern Colorado Heritage Center, where cultural groups share meeting and exhibit space. It faces the Historic Union Train Depot where thousands of immigrants arrived to work in Pueblo's smelters, mills, mines or railroads. The 130-year operation of the Colorado Fuel and Iron Company made Pueblo the largest industrial center west of the Mississippi.

Great economic distress followed the end of production at the plant. Pueblo has worked to reinvigorate its economy through heritage tourism development and downtown revitalization. Today the Bessemer Historical Society, with the help of a Save America's Treasures grant, is archiving the extensive records of the company and aims to preserve the company's buildings to interpret the history of the community and the steel industry.

The city launched the HARP (Historic Arkansas River Project) to redevelop and revitalize Pueblo's Riverwalk and Union Avenue Historic District. HARP restores the Arkansas River channel, once diverted for flood control, to its original location in the heart of Pueblo.