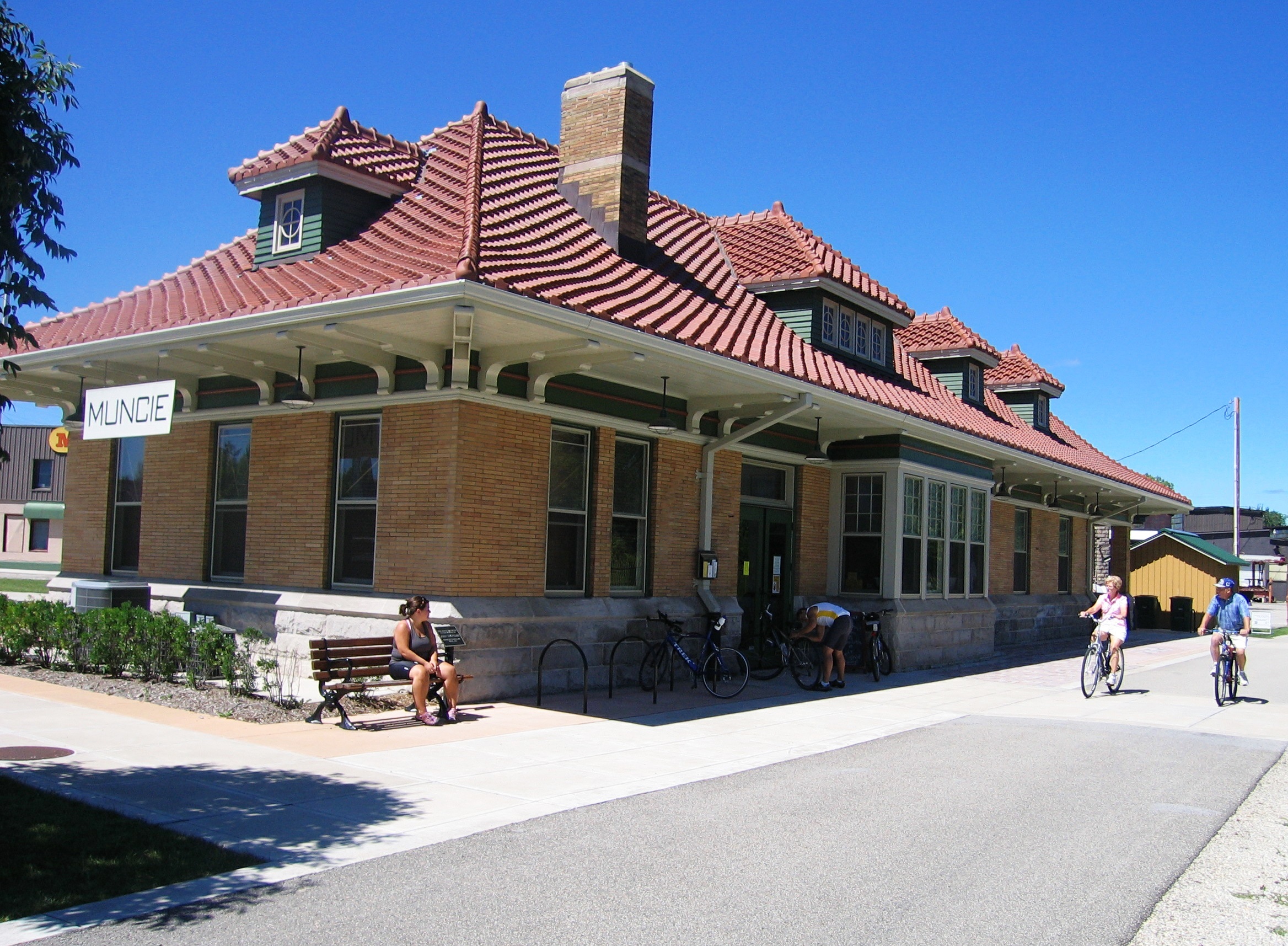 Bicyclists on the Cardinal Greenway pass by the Muncie trailhead in the restored Chesapeake and Ohio Depot (1904), listed on the National Register of Historic Places
SHARE

Muncie, Indiana, (population 67,430) was incorporated as a city in 1865. Delaware Indians, relocated from their lands on the east coast to Indiana and to Ohio, first settled the area in the 1770s. They founded several towns along the White River, including one near present-day Muncie. The tribes were forced to cede this land to the federal government and move farther west in 1818, and in 1820 the area was opened to white settlers. The city’s name is derived from their name for this Indian village.

In 1866, a large natural gas field was discovered, and Muncie attracted manufacturers seeking inexpensive fuel. The most prominent, the Ball Brothers, became the largest producer of glass canning jars in the world. Manufacturers of glass, steel, and other products became part of the gas boom. The automotive industry followed, including International, Durant, Chevrolet, Warner Gear, and others.

The Ball Brothers purchased a defunct teacher-training school and opened a state-operated teachers’ college in 1918. Now known as Ball State University, it is well respected in the fields of architecture and planning, anthropology, education, and communications. The past 20 years have seen the departure of many of Muncie’s manufacturing operations, along with the high-paying jobs they provided. Muncie’s historic resources play a significant role as the community seeks to reinvent its economy and itself.

In 1986, Muncie began its Downtown Façade Restoration Grant Program, funding rehabilitation work on one to two buildings each year. The program has sparked significant private investment in interior rehabilitations, and several façade restorations were done without grant money. As a result, many existing businesses stayed Downtown, and 10 more either started up or moved into downtown buildings. Formerly empty upper floors were developed into more than 25 residential lofts and apartments. Once deserted after 5 p.m., downtown Muncie is now alive with visitors and residents every evening.

Minnetrista, a museum on the site of the original Frank C. Ball home that burned in 1967, opened in 1988. Past exhibits have told local stories of the Woodland Indians, family farming, railroads, and the automobile industry. The collection includes objects and archival material about the people, places, events, and industries of East Central Indiana. Other facilities include the Stoeckel Archives, the Center for Middletown Studies at Ball State University, the Local History and Genealogy Center at the Muncie Public Library, and the Delaware County Historical Society’s Heritage Library.

The Muncie Historic Preservation and Rehabilitation Commission serves as the architectural review board for locally designated historic districts and landmarks and administers the Façade Restoration Grant Program. It also handles ongoing surveys and inventories of historic resources and helps promote public interest in historic preservation. Muncie became a Certified Local Government in 1996.

Three walking tour brochures include maps, a guide to architectural styles and brief descriptions of historic buildings. The Old Washington Street Festival celebrates the Emily Kimbrough Historic District, named after the author and editor of Ladies Home Journal who was born and raised in the neighborhood.  The festival features home tours, entertainment, arts and craft vendors, and photo displays.