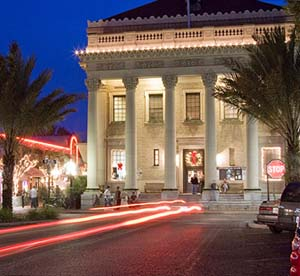 Several buildings in Gainesville, Florida, are listed on the National Register of Historic Places, including the former U.S. Federal Building and Post Office (1911), now home to the Hippodrome State Theatre.
SHARE

Gainesville, Florida, (population 124,491), was founded in 1854 and named in honor of Seminole war hero General Edmund Pendleton Gaines. Created as the county seat, Gainesville was situated in a central location on the state’s first bi-coastal intrastate railroad line.

After the Civil War, the city grew to be one of the largest cotton shipping stations in the South, complemented later by expanding the economic base with citrus and vegetable crops. Phosphate and lumber succeeded the citrus industry when freezing temperatures devastated the citrus crops in the 1890s.

Attractions include the Matheson Museum complex, which features archives, a library, exhibits, and a historic house museum. Just south of the central city district a historic depot is being rehabilitated into a museum dedicated to the railroad experience in Gainesville.