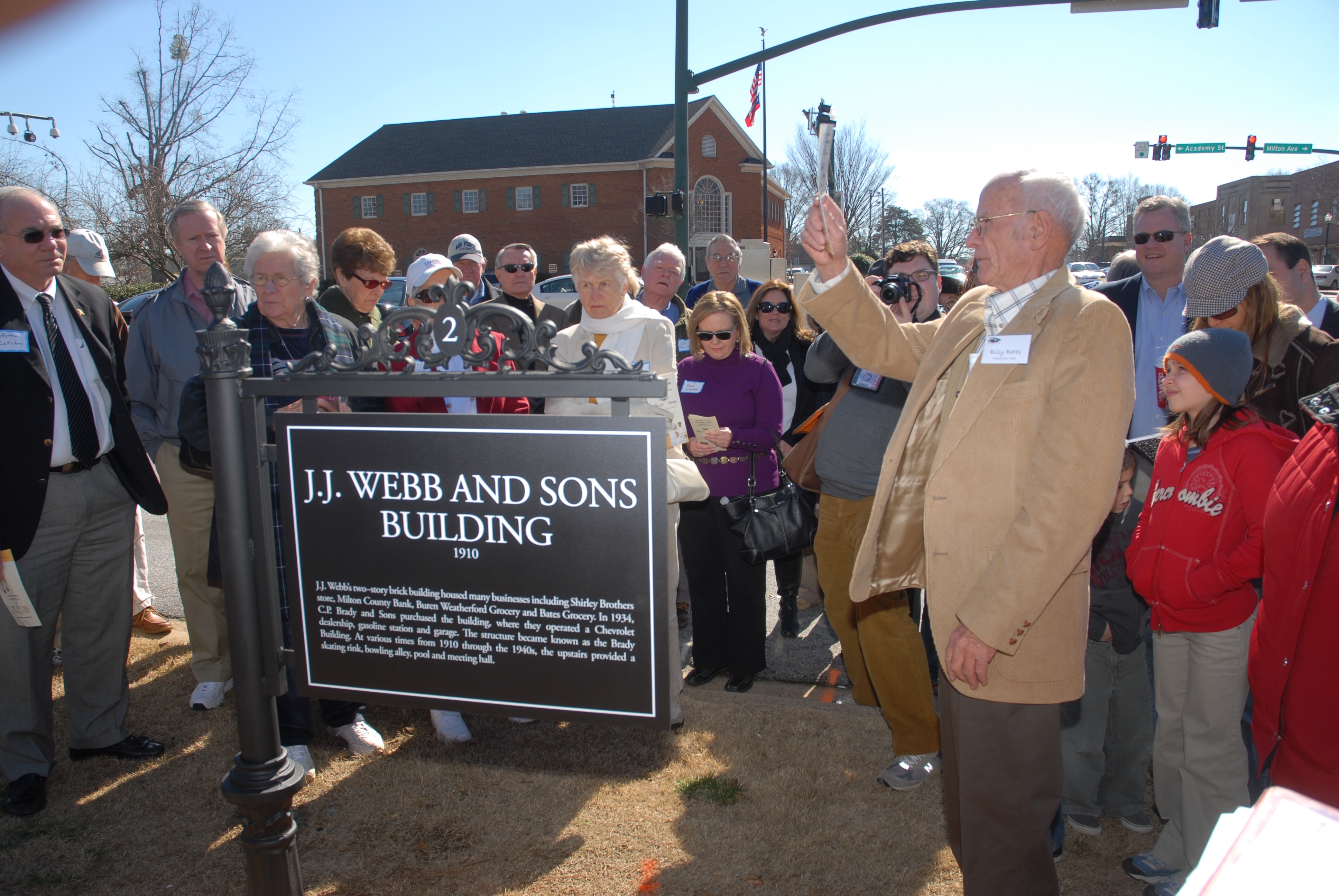 The City of Alpharetta, in partnership with the Alpharetta Convention and Visitors' Bureau and the Alpharetta Historical Society, inaugurated the city’s History Walk. The walking tour consists of sites with markers describing their historical significance.
SHARE

Alpharetta’s early economy was based in agriculture, specifically cotton, but the town also continued to serve travelers, who stopped there on their journeys between Atlanta and Dahlonega. In 1932 Milton County merged with Fulton County after near bankruptcy during the Depression. Following World War II, the agricultural industry diversified from cotton to include food crops and livestock. Alpharetta has experienced major growth in the last 20 years. Only 14 miles from Atlanta’s central business district, today Alpharetta is home to several technology-focused businesses that employ more than 100,000 people.

In February 2008 the city of Alpharetta, in partnership with the Alpharetta Convention and Visitor’s Bureau and the Alpharetta Historical Society, inaugurated the city’s History Walk. The walking tour consists of 17 sites with markers describing their historical significance. Historical society members lead tours several times a year, and a self-guided tour brochure and map are also available. Sixty potential marker sites were identified, so more sites will be added to the tour over time.

The Alpharetta Historical Society manages a number of sites and a research library/archive in the historic Mansell House. The society also runs the FFA Log Cabin, built by Future Farmers of America students at Milton High School in the 1930s. It is the only remaining FFA-constructed log cabin in use in America today. The cabin is furnished with tools and household furnishings from the late 1800s and early 1900s. School and scouting groups come to the cabin for tours to learn about pioneer life. During the Old Milton Country Fair, historical society members in period dress provide demonstrations of pioneer crafts. The historical society will, in the future, run the Alpharetta History Room, a local history museum that will be created in the new city hall.

Civil War veterans initiated the Old Soldier’s Day Parade in 1865. The parade was held annually for many years, and later the Civil War veterans invited the “young soldiers” of World War I to march as well. As veterans passed away, the parade faded and then ended in the 1920s. Re-initiated in 1952, the event has been held each year since. Today the parade consists of a variety of groups including marching military units, the Shriners, floats, bands, wagons and horses, classic cars, clowns, prizes, and candy. The parade ends at the American Legion Post 201 where the celebration continues with entertainment and children’s activities.

In Veterans Memorial Park, a Walk of Memories was recently established through the work of the American Legion Post 201, the city of Alpharetta, and the state of Georgia. Items were donated to Veterans Memorial Park to represent the branches of the armed forces and included an M1-A1 battle tank and a Vietnam-era helicopter piloted by a Congressional Medal of Honor recipient. The Walk of Memories was funded by grants from the city and state and features bricks with the names of Georgia citizens who served in the military. The walk includes 7,000 bricks; one brick for every Georgia service member who was killed in action during World War II, Korea, Vietnam, Iraq, and Afghanistan. Community members can purchase bricks in honor of loved ones who served.