Join our friends at the National Park Service in supporting their theme study of LGBTQ heritage. Read about how to get involved with the initiative here and honor diversity in the national historic preservation program.

The Advisory Council on Historic Preservation (ACHP) executed the amendment to the 2001 Nationwide Programmatic Agreement for the Collocation of Wireless Antennas (Amendment) among the Federal Communications Commission, the National Conference of State Historic Preservation Officers (NCSHPO) and the ACHP. The purpose of this Amendment is to streamline 5G infrastructure deployment, and to continue to reduce the need for new tower construction that could potentially affect historic properties.

The Advisory Council on Historic Preservation had its winter business meeting in San Francisco, California, with three days of engaging with preservationists on the west coast. Council members hosted a listening session at historic Angel Island State Park with more than 20 representatives of the Asian American community to discuss ways to better identify and interpret places important to the nation’s Asian American-Pacific Islander history and bring them into the national historic preservation movement’s consciousness. The Chairman’s Award for Achievement in Historic Preservation was presented to the Discover SF! 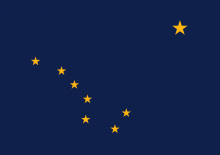 In honor of International Youth Day, the ACHP is highlighting a Preserve America community with a unique claim to youth history: Seward, Alaska. In 1927, as the territory of Alaska considered statehood, territorial governor George Parks and the Alaska American Legion organized a contest to design a territorial flag, believing having such an emblem may help Alaska become a state. The contest was open to all Alaskan children from the 7th to 12th grades, and the ultimate winner, an Aleutian boy named Benny Benson, hailed from the Jesse Lee Home in Seward. Benson's flag was designed as an homage to Alaska's natural landscape and position as the northern-most American territory. Benson won a $1,000 scholarship in the contest, and the flag was adopted in May 1927.