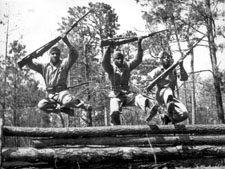 Montford Point Camp, later renamed Camp Johnson, was also the site of a Section 106 Success Story. The Marine Corps had proposed demolition of three of the buildings associated with Montford Point Camp as part of a plan to construct a new academic instruction facility at Camp Johnson. But, using the Section 106 process, the Montford Point Marine Association and the State Historic Preservation Officer later signed a Memorandum of Agreement that preserved two of those buildings and expanded the interpretative media and materials at the site.