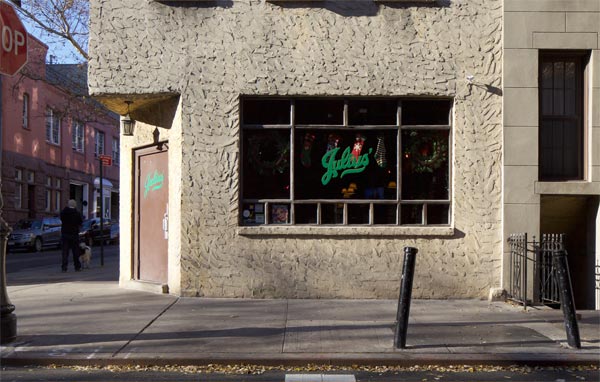 Photograph by Christopher D. Brazee, courtesy of New York State Historic Preservation Office
SHARE
This block is broken or missing. You may be missing content or you might need to enable the original module.

Lesbian, Gay, Bisexual, and Transgender Pride Month is celebrated each June to honor the 1969 Stonewall riots in Manhattan, a tipping point for the Gay Liberation Movement in the United States. However, a full three years prior to Stonewall, a “sip-in” was staged at another New York City establishment, Julius’ Bar. Listed on the National Register of Historic Places in 2016, Julius’ Bar, located at the corner of West 10th Street and Waverly Place in Greenwich Village, was built in 1826. After serving as a grocery store, the structure has been a bar since 1864.

According to the bar’s website, it was a popular speakeasy during Prohibition that was frequented by many of the most famous jazz and literary legends of that time: “It started to attract a gay clientele in the 1950s and it is surely the oldest gay bar in the city and the oldest bar in the village.” On April 21, 1966 four activists from the Mattachine Society staged the “sip-in,” ordering drinks and declaring they were gay, at Julius’ Bar to challenge the New York Liquor Authority’s regulation prohibiting bars and restaurants from serving alcohol to homosexuals. This action sparked an investigation from the NYC Commission on Human Rights and led to overturning the regulation in court.

Today, the bar’s owners continue its social-mindedness by supporting the local community by donating to several charities and community organizations. Click here for more information about Julius’ Bar and its listing on the National Register of Historic Places.