CLOSE
BACK TO traditional trades training 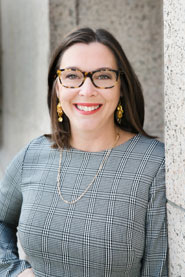 Aimee Jorjani served as the first full-time chairman of the Advisory Council on Historic Preservation (ACHP) from 2019-2021. Her passion for promoting the historic trades led her to create the ACHP Traditional Trades Training Task Force during her tenure. Currently employed by the Architect of the Capitol, she also is a member of the Virginia Board of Historic Resources

She has nearly 20 years of experience in the fields of government and cultural resources in both the executive and legislative branches, as well as the non-profit sector.  She has held several positions at the Department of the Interior (DOI), including serving as the Deputy Secretary’s Special Assistant for Historic Preservation and as DOI’s first Department-wide Historic Preservation Officer. From 2003-2009, she was instrumental in the implementation of the White House’s interagency Preserve America initiative. She has consulted for a variety of projects, including the Historic Preservation Fund’s reauthorization efforts, 2016 National Preservation Advocacy Week, and various preservation-related outreach and interpretive efforts.